Ultimately, Rape Escape Options include knowing that a woman facing rape can never be sure if the rapist intends "only" to rape her without further harming or even killing her afterward. If a rapist does become violent with a submissive victim, the escalation is usually sudden and explosive.

If posturing isn’t working, fleeing isn't possible, and outsmarting is falling short, you have two options left: surrendering or fighting

Dare you risk surrendering and putting yourself fully at the mercy of a criminal – or fighting?  Only your intuition can guide you. If you do choose to fight, then attack him as described in Fighting Options - Overview.

Ultimately, responding to any violent rapist with an eye-gouging, throat-bashing, testicle-shredding kill-or-be-killed fight for your life may well be your best chance for survival. See Optimal Mindset.

Research from the Australia Institute says that some cultures may share rape-supportive attitudes toward Western women, that there are two types of women – good girls and sluts. And sluts deserve to be raped for dressing in revealing ways or accepting an offer of a lift.

Beware of exposing yourself to some barbaric males when certain clothes impede your running and fighting. Or, think how you would fight in those clothes – such as kicking off your high heels to run or kick. However, that's merely the beginning of a new attitude – which requires your absolute willingness to cause severe injury to a rapist. 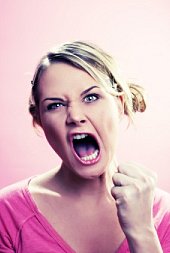 A man ambushed a woman on a Chicago street and forced her to preform oral sex. She bit off his testicles. Police arrested him at a nearby hospital. Doctors were unable to re-attach his testicles. See Painful lesson just beginning for rape suspect

A nurse lopped off a man’s penis with scissors when he tried to rape her in Papua, New Guinea.

A serial rapist’s tongue was bitten off during a rape. Fallbrook CA police found Ronald Douglas McGowan Jr.’s severed tongue at the crime scene, but doctors could not re-attach it.

Abi Grant (author of “Words Can Describe”) awoke with serial rapist Greig Strachan on top of her. He threatened to kill her and began punching her. She punched back. He pinned her arms and stuck his tongue in her mouth. She bit hard. He lurched back and she grabbed his penis, squeezed, twisted, and dug in her nails. He went berserk and began punching her again until she used his penis to haul herself up into a sitting position and head-butted his face with all her might. He fled.

A Google search for: attack rapist's penis is updated daily.

PERHAPS THE ULTIMATE RAPE ESCAPE - GRIP IT & RIP IT

Even when erect, a penis is merely soft tissue that's attached to a man's body only by weak, blood-engorged, spongy tissue, skin, nerves, and blood vessels – not by bone, cartilage, ligament, tendon, or anything at all sturdy. The same is true for the testicles and scrotum. Thus, a man's genitalia are extremely vulnerable - as fragile and tender as your eyeballs.

A rapist's genitalia is within reach of the (unbound) victim – either from behind or in front – and many martial artists claim that it can be easily torn off his body. However, a lack of volunteers to test this theory forces it to remain part of martial arts’ lore. However, if you think about it, this very same lack of volunteers makes it blatantly obvious that it's far too dangerous for anyone in his right mind to try testing this theory as a guinea pig – even a failed attempt would be excruciating and could permanently maim him.

So it's a safe bet that a woman ferociously grabbing, squeezing, and wrenching a rapist's genitalia like wringing out a washcloth and not letting go – even one-handed – will likely seize control of the encounter. With the utmost irony, his fragile tool of crime suddenly becomes his undoing – truly poetic justice.

Many women don’t realize just how extremely delicate testicles are, so here’s an insight:

Target his Eyes, Throat, and Testicles

Eyeballs and testicles are very similar in sensitivity. Think of how extremely delicate anyone’s eyeballs are – even an air-borne speck in your eye is distressing. Close one eye and lightly tap your eyelid and feel how vulnerable your eyeball is. Then imagine how excruciating any more force would be. The sensitivity of testicles is virtually identical (and the penis is almost as delicate). Thus, a rapist's most vulnerable targets are his weakest body parts: his eyeballs, testicles, and throat (punching his "Adam's Apple" in the middle of his throat - making him gag and choke).

To Stun & Run, use a Sucker Punch to deliver Finger-Whips-to-the-Eyes (even just one of your fingertips striking just one of his eyes will snap his head backwards, thus exposing his throat to your punch). Then knee-strike his testicles. You can also add a Heel-Stomp on his foot (to further deter his pursuit when you suddenly flee). Practice it for one minute daily so you'll react more quickly if ever needed. Remember Eyes, Throat, Testicles. And the penis itself is also a top target.

If he tries to kiss you, bite into his lips until your teeth meet – chomp down as hard as possible – then cause maximal damage by vigorously shaking your head side-to-side like a vicious dog shakes its prey. Use that with the Clinch Attack described in Self Defense Techniques. Then, imitating the most ferocious dog you've ever seen, immediately attack him with furious Mixed Strikes to ensure your rape escape. See Fighting Options - Strategies.

Any time a victim fights back against a rapist, they may cause each other to bleed, thus she risks exchanging her blood or other bodily fluids with his. But few rapists have HIV/AIDS (less than 1 percent of the general population does). Further, a woman biting a rapist with HIV/AIDS/STDs – or fighting back at all – has no more risk of becoming infected than if she were raped by him (again, exchanging bodily fluids). Besides, the rapist may decide to murder a passive victim so she can't identify him afterward.

Only Your Intuition Can Guide You

You may feel that maiming a rapist is too gruesome an act for you. That, of course, is your decision – though you may feel very differently during an actual attack. Yet you still have a very powerful option: grabbing his genitalia with a crushing/wrenching grip and holding on until you can maneuver him into a situation from which you can safely escape – as did Curtescine Lloyd in Rape Escape Options - Overview.

It's not uncommon for a rapist to murder his victim afterward to eliminate the only witness. So you may be fighting for your life as well as to prevent rape. Thus you may need to fight like a maniac – see Stress Control - Optimal Mindset.

To deter a predator - beforehand - carry a Personal Security Alarm (screamer or noisemaker) & Pepper Spray in plain sight. Those pages tell you how to use them most effectively.