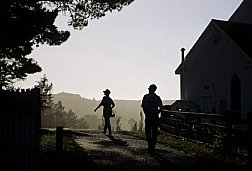 Most people think street crime is a game of chance, but you can stack the odds more in your favor.

Victims are often paralyzed by the "startle factor." They're lost in their thoughts and suddenly chaos erupts – they freeze. See stress-control-fear-itself.

Pay close attention to crime stories you read or see on the news – or read on this website. If something similar happened, what would you do? What mistakes have victims made? What have victims done to escape? So if a similar situation does come up, you'll have more-informed ideas and forethought and can better weigh your options on the spot – even though each case is different. Some victims are feistier than others and may have succeeded with something that could have gone either way.

It's much more dangerous to be abducted. If you're in a parking lot or on a street – those are still public places and it's possible that people are around if you scream or run (either rescuers or witnesses that predators avoid). But once you're taken away – your odds of survival are always worse. That’s why a predator wants to take you to a second, secluded scene – there are few, if any, rescuers or witnesses around.

Whether to fight back (stun & run) or comply – with a wannabe-kidnapper at the initial crime scene – depends on the situation and is up to you. You must decide on your own – following your intuition.

What if he's got a gun? See Survival Options - Kidnapping. It's far better to know this and not need it, than to need it and not know it.

It CAN Happen Here 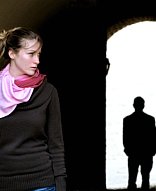 It can happen here – even on one of the quietest blocks in town. A woman’s 3 am stroll with her dog went bad when she was almost back to her front door and heard the gate behind her squeak open. A man was coming toward her. She walked away from the door because she didn’t want to be forced inside – knowing it can get a lot worse inside.

The man punched her and threw her to the ground. She said he put his hands up her dress and tried to pull down her underwear, but she resisted and screamed as loud as she could. Luckily, neighbors came running and scared him off.

First, you can be attacked where you least expect it. Second, she was right: don’t let him force you inside your home – a Mug-In – or force you to go to any other secluded place where nobody will be able to help you.

THEY WALK AMONG US

Only a fraction of the ~800,000 U.S. cops are on the street at any one time. Yet roughly six million paroled violent felons walk among us – including ~800,000 paroled murderers. Another ~630,000 parolees emerge from prison each year, with roughly two-thirds re-arrested for new crimes within three years, per the USDOJ.

For every cop you see, you’ve also likely seen paroled muggers, burglars, carjackers, killers, kidnappers, stalkers, rapists, and molesters (along with all the up-and-coming young monsters) while you're out and about in public – but you didn’t know it. They usually try to blend in and act oh so innocent.

The bad guys far outnumber the cops, and if you or a loved one tempts a predator just once, your life may shatter forever. Hordes of heartless predators are always out there – somewhere – often where least expected. Anyone living in an urban/suburban area lives within minutes of thousands of them, and the few good guys can’t possibly begin to always protect all of us. After all, when seconds count, cops are minutes away! Always remember that, nationally, the average 911 police response time (including rural areas) is ELEVEN minutes! That's an eternity when your life is on the line.

Along with "fight or flight” and surrender, I’ve added two more: outsmart and posture, and aligned them all with FBI guidelines (but clarified their clunky wording):

1. Posturing: presenting yourself as a tough target. If that doesn’t work:
2. Fleeing, the most obvious choice, might not be possible. If not:
3. Outsmarting: by talking your way out and maneuvering toward escape. If that doesn’t work:
4. Surrendering and hoping for a predator's mercy to let you live; or preferably as a trick leading to a sudden escape, perhaps aided by:
5. Fighting like a mad dog for your escape. Stun & run.

Deter a predator by carrying a Personal Security Alarm (screamer or noisemaker) & Pepper Spray in plain sight. You'll also learn how to use it most effectively there.

You alone are responsible for your safety. Predators target easy prey. Make yourself a hard target.