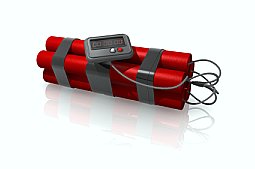 Crimes of Passion: Are human time bombs nearby without you even knowing it?

Here are personal security tips for women from crime victims that involve everyday human behavior simmering just below the boiling point of a violent eruption.

You need to know that one-third of all homicides are escalations of trivial squabbles arising among strangers, coworkers, neighbors, friends and family – killing scores of people every day worldwide.

These killers are not predators hunting for prey, but human time bombs on the verge of exploding into rampages if ordinary events converge into perfect storms. Witnesses usually claim afterward that the violence took everyone by surprise – but a closer look almost always reveals glaring warning signs that they and the victims had ignored.

A Chicago man killed his brother during an argument over whether a star or an angel went on top of the Christmas tree. The same warning signs of crimes of passion described in Workplace Safety - Risks & Remedies also apply to workers off the job. Rarely does a day go by without people killing each other over a neighbor’s dog poop on their lawn, tree branches growing over a fence, loud music, cutting ahead in line, real or imagined insults, or Road Rage.

A woman was beaten when a customer behind her in a Lowell MA supermarket checkout line became enraged that she had brought 13 items through a 12-items-or-fewer lane.

A Houston TX McDonald's customer became enraged when she was denied mayonnaise on her hamburger and ran her car over the restaurant's manager.

William Serrano stabbed his Houston TX roommate to death because he complained about his stinky feet.

A cashier in a crowded Athens GA McDonald's opened a new line and two women stepped to the front of it. That enraged another woman who threatened to kill them, then left the restaurant and waited in her car. When the two women emerged, she struck them both with her car.

As soon as you realize that somebody is an irrational hot-head, leave as soon as possible – it's impossible to reason with the unreasonable.

Dorothy's new Detroit MI neighbors’ teenage kids began throwing rocks at her toddlers. After a police warning, the teenager's father began raging at Dorothy while stalking their fence line with a pistol in his hand. Other neighbors were afraid to testify in Dorothy's behalf. Soon her shrubbery and car were vandalized. She sold her house and moved away.

Anthony Giovannini was struck with an arrow as he was walking inside of his Philadelphia house. Giovannini then saw his neighbor, Robert Wood, entering his own home. There had been an ongoing feud between Wood and Giovannini over parking spots.

Dennis Rock punched Gary Kretzer during an argument over parking spaces in front of their Cincinnati OH homes. Kretzer hit his head on the pavement and was paralyzed, blinded, and unable to speak. 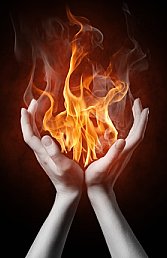 You’re playing with fire if you have a confrontational personality and insist on self-righteously imposing your sense of morality on others, especially on the blatantly closed-minded. Don’t waste your breath and risk your hide trying to enlighten the proudly belligerent. There's nothing you can say that will ever change their minds. Too primitive to understand, they might be as dangerous as they are rude.

Debating politics, religion, morals, or sports often leads to arguments, even violence. Try to change the subject as soon as opinions clash. Though it’s tempting to try to convert others to your infinite wisdom, trying to change someone’s lifelong beliefs is futile. Spare yourself the bother and the risk.

WHO'S NEAR THE EDGE?

Even ordinary people with no history of violence commit crimes of passion. They often share deep emotional bonds with their victims that led to betrayals or passionate disputes – such as unfaithful spouses or lovers, or people disagreeing about financial or prideful issues. Or a stranger was in the wrong place at the wrong time. Each of us is potentially a passionate murderer – or a victim of one.

Immature young men often engage in violence while trying to impress their friends or a girl. Often they react to a verbal taunt rather than just ignoring it. Or sometimes they’ll provoke violence by taunting other males.

Swaggering, macho belligerence, territorial attitudes (even refusing to yield space while passing on the sidewalk), hostile glares, “locking gaze” stare-downs and strutting, cocky, provocative behavior challenges other primitive macho types. “What you lookin’ at, punk?” Throughout history, this ridiculous, baboon-like posturing has caused wanna-be alpha-males to maim and kill each other. Graveyards and prisons are full of tough guys.

Personal Security Tips: Being neither provocative nor timid, simply carry yourself with quiet confidence, remain alert, ignore challenges, and walk away (or run) from confrontations. Fighting for “honor” definitely crosses the fine line between bravery and stupidity. Fighting is courageous only when absolutely necessary in self-defense.