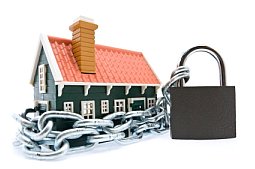 Turn your home into a fortress for burglary prevention by fixing the flaws in your home defense that burglars search for.

Burglary is the most preventable of crimes. Simply make your home the least burglar-attractive – and most burglar-proof – in your neighborhood.

Remember, "safe" neighborhoods are like unicorns - they don't really exist. Even if you live in Sleepy Valley - know that predators love hunting where the prey least expect them.

• Most burglars enter through unlocked (or weak) doors or windows!

• Anything to help them climb to a less secure window, such as tree limbs or latticework – or standing on a vehicle, unchained patio furniture, or garbage cans to reach higher.

• An attached garage is a bonanza if it’s easy to get into. Hidden from neighbor's view, they’ll penetrate the door to your house.

• Screens are easy to quietly slice and reach through to unlock a door or climb through a window.

• Homes without dogs or nosy neighbors.

• Noises (such as heavy traffic or other machinery) help prowlers.

A survey of paroled burglars showed how they think. Some burglars prefer the cover of darkness – so they avoid lighted areas. If lights are within hand's reach, though, they can unscrew them.

Also, they know that most burglar alarm warning stickers are phony but usually move on to another home anyway. Sometimes, though, they’ll check it by breaking a glass pane to see if it works.

In daylight, they look for doors or windows not visible to neighbors or passersby. An unprotected attached garage is a gift to a predator.

Look at your home through a burglar’s eyes and improve the worst area first. The most important burglary prevention improvements are fortified doors and windows, good outdoor security lighting, and wired or wireless burglar alarms.

Jennifer Hazen of Lexington KY said she was expecting a friend, so when she heard a knock at the door, she opened it, and instead found a man wearing a ski mask. He forced his way inside, pushed her down, and slashed her face with a knife. That's when her pet boxer came to her rescue and ferociously chased him back out the front door. 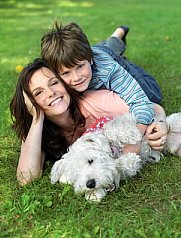 Burglars usually avoid homes with even a small barking dog. Most adult dogs from animal shelters are ready to begin providing home defense right away - protecting their territory and the family they love.

And it needn't be a dog that's dangerous to innocent people. In fact, it's an enormous responsibility and hassle to prevent an overly-aggressive dog from harming children, friends, family, neighbors, deliverymen, repairmen, and other pets.

Find insights and guidance in Adopt the Perfect Dog: A Practical Guide to Choosing and Training an Adult Dog by Gwen Bailey – Readers Digest Books.

A Pair of Home Invaders Used Different Entries Each Time

How to React in Home Invasions 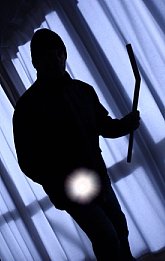 Some people say, "If I ever wake up and find a burglar in my house, he wouldn't get out alive!" But initiating violence is too dangerous. Fight only if you must – in self defense.

Try to avoid confronting burglars. Beforehand (such as right now), prepare your bedroom as a refuge with a simple brace to hold the door shut.

Most doorknobs are 36 inches from the floor. Get a 2X4 piece of wood 6 inches longer (42 inches). At the lumber store, have a V-shaped notch cut into one end. Insert that end under your doorknob and put the other end on the floor. The door now cannot be opened (but it can be kicked-through).

That might give you enough time to call the police from a cell phone (a burglar might have already cut the wires to your land-line phone). Or, better yet, convert your bedroom into a Safe Room.

However, if family members – especially children – are in other rooms and vulnerable to the burglar, you'll need to rush to their rescue (after you’ve phoned the police). But remember that the average response time to emergency 911 calls in the U.S. is NINE minutes – an eternity in home invasions.


If you do confront a burglar, allow him to escape. Or, you should flee to safety. Too many victims, men especially, try to capture or punish a burglar, which leads to a dangerous escalation of violence. Again, fight only if you must – in self-defense. See Survival Options - Overview.

An ounce of prevention is worth a pound of cure

Burglary prevention is an investment to protect your possessions – and if you’re at home when a criminal targets your home – it's actually home, health, and life insurance.

Make sure you insist all your family members always observe security strategies - it takes only one careless member to endanger your entire family. A chain is no stronger than it's weakest link.

Predators always find prey – but the most cautious targets will most likely be safer. It's simple logic. See Security Products Overview.