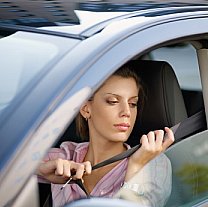 Learn driving safety tips and survival strategies that could save your life – and things you should never do while driving.

Upon arriving home, the Fort Bend TX family had just pulled their car into their driveway when a man approached them asking for directions. As the father walked toward the man to help him, the man pulled a gun, robbed him, and then he and the getaway driver fled. The victim believes they'd been followed home. 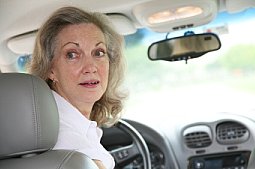 As they arrived home, a couple saw a car drive by their house. The driver looked like a man they'd seen earlier that night. Just before dawn, Tracy Lee Harden broke into their home, hit the sleeping husband in the head with a hammer, and dragged the wife into another room and raped her. Her husband, bleeding and barely conscious, stumbled into the room and hit Harden. The husband and wife then both fought him until he fled.

Make it a habit to circle the block before you go home. If anyone is following you, don’t go directly home. Go to an active public place, stay in your locked car and blow the horn.

Two men attempted to carjack Tommie Nell Hannaford in her driveway when she returned from the grocery store. One man pointed a gun at the window and demanded her car. Instead of complying, Hannaford blew her horn, put the car in reverse and raced out of the driveway while he fired a shot at the vehicle.

GETTING IN OR OUT OF YOUR CAR

Predators know that they can get your keys, car, and cash (and maybe want you too) whenever you're in or near your car. While going to or from your car, make it a habit to hold pepper spray at the ready. Also have a personal security alarm (noisemaker or screamer) – or keep your thumb on your car key’s Emergency Button to blow the car's horn. Also see Parking Lot Safety.

Do the same whether you’re in a parking lot or at home – whenever you’re near your car.

Alexandra Zapp stopped at a Massachusetts rest area to use the restroom. As she exited, she saw Paul Leahy standing there with a knife. He pushed her back into the room and stabbed her to death.

Kristin Laurite stopped at an Arkansas rest stop to walk her dogs. Ronald Ward, a drifter, attacked Laurite there, raped, and murdered her. 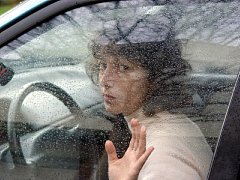 • Know its name or the closest mile marker in case you need to call police.

• Avoid parking close to trucks that could prevent witnesses from seeing your car – predators seek that kind of cover.

• Older children and adults should have someone go with them to the public lavatory or wait outside. If a child under age 12 is of the opposite sex, knock on the door, stick your head in to check it out, and then guard the door. Or take a younger child to your bathroom with you – just make an announcement as you enter.

• Instead of napping at a rest area (or on the side of the road), find an RV campground. For a small fee you can nap in your car with reasonable security.

• Get your child a noisemaker alarm (the “pin-pull” type) to be attached to a belt. Engrave your name and phone number on the back of it.

• Never leave your child unattended for even a moment. If you get separated within a crowd of adults, crouch down and look for your child's feet – they’ll be easier to spot. If no luck, loudly yell, "Help! My child is missing!" People will respond.

• Never leave your child unattended in a car – especially with the keys in the ignition. If ever you see such an appalling violation, call the police immediately. Foolish parents need a harsh lesson.

KNOW IT’S SAFE BEFORE YOU TURN OFF THE MOTOR

One night, Charlie drove his car into a parking spot in a Detroit convenience store parking lot. But before he turned off the motor, two men were at his window – one pointing a rifle at Charlie as the other one urged, “Shoot him! Shoot him!”

Charlie calmly said, “Take my money, take my car. Just let me go. I’m reaching slowly into my pocket for my money.” As Charlie was about to hand it over, he heard a voice in his head (he swears it was his guardian angel) saying, “Crumple the money! Crumple the money!” So Charlie crumpled the bills into a ball and handed it over.

Both bandits turned away to uncrumple the money in the light behind them, probably anxious to see if they had enough money for more drugs. Seeing his chance, Charlie roared out of the spot as they yelled, “Hey! Where you goin’?” while raising the rifle to take aim. Charlie ducked while roaring away.

Charlie was lucky that they turned around for light to see their loot and lucky that his car's motor was still running. Ever since then, Charlie looks around carefully before turning off the motor and exiting.

IF YOUR CAR BREAKS DOWN 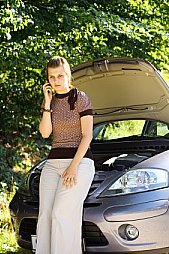 A stranded motorist is a prime target for a criminal. Stay IN your car as you call for help on your cell phone. If you hang a white rag on the side-view mirror (a distress signal), beware of predators – like hyenas spotting a lame antelope.

No matter how nice a Good Samaritan may seem, few people other than predators offer to help. See Criminal Minds - Wolf in Sheep's Clothing. If anyone does offer, stay in your locked car and, through a slightly opened window, ask him to stay in his car nearby to serve as your witness. If he offers you (or your companion) a ride, do NOT accept it. Do NOT leave the relative safety of your locked car. Gamble in Vegas – not in your life.

Stay inside your locked car unless you’re worried about a passing car smashing into yours (it sometimes happens to cars on the roadside). Hide nearby until a cop, tow truck, or friend responds to your call. Do NOT wander off unless you know where you’re going.

13-year-old Alexis Waley was riding in the backseat of her mother’s car when Richard Calderon’s car ran a stop sign and hit them, then kept going after the crash. Waley’s mother, an off-duty Texas State University police officer, followed the suspect to get a license plate number. As she followed, Calderon turned around, got behind her car, pulled a gun and opened fire, killing Alexis.

If you chase a fleeing criminal to get a license plate number, you risk crashing your car – and might hurt other innocent people, too. That’s why even police squad cars hesitate to give chase. And, as shown in the above hit-and-run, you also risk the criminal’s retaliation.

That said, one of the few times a citizen pursuit might be necessary is if you see a kidnapper abducting someone. Find more safety tips at Outdoor Safety - Rescuing a Victim Safely. 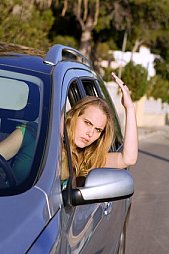 Victims of road rage often (roughly one-third of the time) escalate the danger by taunting an already agitated hothead. Sure, maybe the other driver truly is a belligerent moron. That’s all the more reason to stay away and not antagonize him/her. If you can’t control your anger, don’t expect the other driver to do so.

Always assume other drivers are armed lunatics (whether armed with a gun or a car). Don’t provoke anyone to pull the trigger or swerve his car at you.

If you’re a slowpoke in the fast lane, and someone wants to pass you, get OUT of the way! You are NOT a traffic cop. Do NOT try to enforce the law by impeding someone who’s in a rush. Let the real traffic cops deal with a lawbreaker. Sure, call 911 with a description and license plate number of a dangerous driver. But beyond that, do NOT antagonize anyone.

Maybe the road rager is in a rush (late for work, desperate to reach a lavatory, or whatever). You do NOT know and you are NOT a cop. Get out of his/her way and let the police deal with it. 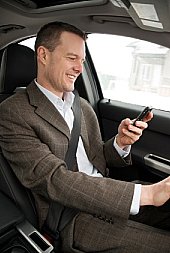 If you drive while talking on a cell phone, drive extra carefully, make it brief, then shut up and DRIVE. And only IDIOTS send text messages while driving – they’re as bad as drunk drivers killing innocent people. Pull your car over to the side of the road or in a parking lot, and stop to text.

To avoid the wrath of a road rager: try to be patient with dangerous fools. Always remember that half the population has an IQ below average – and that the average person thinks they’re above average. Be patient with those who don’t know any better.

If you are a road rager, learn to be patient with dumb drivers. They'll make you crazy and YOU will get into BIG trouble. You can’t avoid them or control them – but you can control your reaction to them. Remember that anger is just one letter shy of danger. Find more driving safety tips at Road Rage.

• Make it a habit to circle the block before you go home – to see if anyone is following you.

• Make it a habit, when parking, to look around carefully before turning off your car's motor and exiting.

• Make it a habit, while going to or from your car, to hold pepper spray at the ready. Also have a personal security alarm (or keep your thumb on your car key’s emergency button).

• Lock your car doors the instant you enter your car and keep your windows closed – then immediately drive away.

• To avoid carjackings: always be aware of your surroundings and have an escape route. If a suspicious person approaches, blare the horn or drive away. If it's too late, give up your property without resistance. See Avoiding Carjacking.

• To avoid the road rage of another driver: drive courteously and respond passively to an aggressive driver.