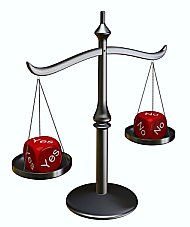 Fleeing is the 2nd of 5 Victim's Options. But fleeing from a predator isn’t always the best of self defense strategies. Here are some possible complications:

• Do you have the stamina to run all the way to safety, wherever that may be? You don’t want to be exhausted if chased down by an attacker with more stamina. (You might have to first hurt him with a Sucker Punch (such as surprise-attack Finger-Whips to his eyes) – then flee.)

• A faster pursuer can easily shove you from behind and send you sprawling face-first and likely hurt you. So if a pursuer is nearing you, stop and face him to better defend yourself. Be ready to dodge him like a matador sidesteps a charging bull. Perhaps trip him as he passes and Heel-Stomp his foot or ankle, so he can't chase you further. (Stomp with the underside of your heel, and use all your body-weight to smash his foot or ankle.)

• Do you have a physical impairment (such as a bad knee) stopping you from running away? (Or if you're wearing high-heel shoes, kick them off so you can run faster.)

• You might be with a child or someone else you can’t abandon or carry in flight.


To summarize your victim's options: If you can flee, try to leave obstacles behind you in your wake by knocking things over to slow your pursuer (such as lamps or light furniture). Or run in circles around an object such as a parked car. If possible, and if you're skinny enough, get under a car (on your back) and hold onto the underside so he can’t drag you out. If he crawls under there after you, simply crawl out the other side.

If it’s too late to dodge a robbery or carjacking, surrender your valuables, then flee before the crime escalates to rape or kidnapping – in which case, perhaps, you’ll choose to fight to enable your flight.

If fleeing is not a viable option, you must instead choose another of the victim's options: posturing, outsmarting, surrendering, or fighting.