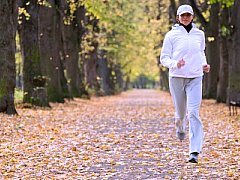 Is a predator lurking on your path without you knowing it? Learn running safety, walking safety, & biking safety from crime victims for what you should and shouldn't do.

In hindsight, Melanie Gable should have listened to her intuition warning her when she saw Robin Carter in his truck watching her intently. He drove up behind her at full speed, smashing her legs and internal organs and sending her flying. Carter got out of the truck, smiling at her on the ground, then drove off.

Runners often ignore safety. Addicted to the exhilarating “runner’s high,” they run in lonely areas without a care in the world. But if you're a victim of violent crime, you might never run again.

Richard Leadbeater, a husband, father, and serial rapist, jogged past her as she was walking over a footbridge in Milton Keynes UK, then lay in wait, pulled his knife, and pushed her into the bushes to rape her. She knew about the recent rapes in the park but didn’t think twice about it.

Easy prey:
• Anyone talking on a cell phone or wearing earphones – unable to hear impending dangers around her.
• Anyone looking friendly, timid, lost, or absent-minded – she's more easily stalked.
• Anyone unaware she's being followed until she's isolated.
• Anyone enjoying a secluded countryside, beach, woods, or park.

Sarah Fox was strangled in New York City's Inwood Hill park. It’s a peaceful place, but also full of peril. If you scream no one's going to hear.

THERE IS SAFETY IN NUMBERS 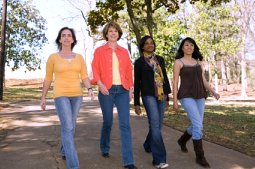 Running safety, walking safety, & biking safety all involve the risk of being isolated with no help or even any witnesses around. Always remember that the law of the wilderness always rules - predators attack the prey that stray away from the herd.

At the very least, be with as many friends as possible, each of you carrying pepper spray in plain sight to deter a predator – staying alert for a surprise ambush (though that won't help against a gunman).

You can lessen your risk by staying in a more populated area. If the crowd starts thinning out, go with them. Gamble in Vegas – not in your life.

A Princeton NJ woman, walking alone along a bike path at night, was tackled from behind by a man with a knife, dragged off the path and raped. Neighbors are shocked that such a violent crime could happen in the quiet and safe upscale area. Bikers, joggers, and dog walkers use the unlighted path around the clock.

A Libertyville Illinois woman was jogging on a trail in early afternoon when Christopher Hanson (a paroled serial offender) grabbed her from behind, dragged her off the trail, raped her then stabbed her in the neck three times. He covered her with fallen leaves and checked to see if she was still alive. She held her breath and pretended to be dead until he left.

Four teenagers in Indianapolis IN lay in wait as Darrell Arthur pedaled his bike along a recreation trail. They ambushed him and beat him to death. Only his killers would have heard his screams.

On the bike path in Easton PA, the seemingly childlike Jason Finken asked one woman for the time, and gave directions to at least two others. Later, he knocked a woman off her bicycle and raped her at knife-point.

Joan Diver was murdered on a bike path in suburban Buffalo’s wealthiest community – where the "it couldn't happen here" attitude is widespread. It was the second such recent murder in the area, yet few have changed their ways. Altemio Sanchez, a church-going, suburban, well-respected, beloved husband and father later confessed to murdering her and raping a dozen other women, murdering three over a 20-year period on that same bike path - all in broad daylight. The day after Diver's body was found, two women were running nearby, separately, with few others around. One was wearing headphones, and the other was talking on a cell phone. The naiveté of the prey never ceases to amaze.

A Washington DC couple was attacked while out for their routine early-morning walk on a riverside path. William Bennett, 57, was found dead and his wife, Cynthia, 55, was critically injured.

Police warned the public after a woman was raped while walking through a park after midnight. The police outlined safety suggestions including:
• Walk with a partner
• Carry a cell phone
• Stick to well-lit routes
• Let someone know where you are.

That's the typically useless police advice after an attack. Let’s look more closely at this “wisdom”:


• Walk with a partner. Why? Both you and your partner can be bound and raped at gun or knifepoint – or worse. See Hostage/Slave on Survival Options - Hostage Taking


• Carry a cell phone. Well, if you can possibly manage to call for help while being attacked (unlikely), the average police response time is ELEVEN minutes (even worse in a park). So, yeah, carry one, but know its limits.


• Stick to well-lighted routes. Why? Predators attack in sunny daylight, too. They don't care much about lighting – they care far more about witnesses seeing them. That's why they choose isolated ambushes – regardless of the lighting.


• Let someone know where you are. Why? Like the police, any help will likely arrive far too late. 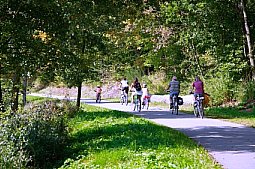 Instead, here are the biking, walking, and running safety tips you need:

DON’T go to isolated places, especially alone. If you must go to an isolated place, go only with a group of friends – all armed and ready with Pepper Spray and a Personal Security Alarm (noisemaker or screamer).

However, it’s FAR better for biking, walking, and running safety to simply always avoid lonely areas. Mother Nature will not save you. See Camping and Hiking Safety


And... do you know how to deal with a Dog Attack on you or a loved one?

WHEN IT'S DO OR DIE

Candice Moncayo was running on a trail in San Diego CA when she was attacked by John Gardner III without warning (he was later arrested for the murder of teenager Chelsea King on the same path). Moncayo bravely fought, elbowing him hard in the nose, making him pause long enough to allow her to run away.

Yes, she escaped through valiant self defense. But it's better to avoid such dangers beforehand by following the above advice.