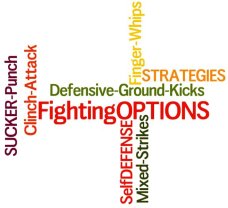 Fasten your seatbelt - you’re about to learn lifesaving fighting options. Forget about fighting “fair” – it's a quaint playground concept that can get you killed. To escape from a violent criminal you must fight “dirty.” You must attack him like a mad dog. To overcome your reluctance toward hurting someone, always remember that many murder victims throughout history would've instead escaped alive had they known what's on this page.

[NOTE: This is self defense strategic advice - not legal advice. Ask your attorney how these fighting options apply to you.]

Your best options are to use Finger-Whips to the eyes as a sucker punch followed by Mixed Strikes (explained below) to attack him.

If he strikes back, then stifle his punches with a Clinch-Attack (explained on Self Defense Techniques). If you both end up together wrestling on the ground, still use the Clinch-Attack.

If you end up on the ground with him standing above you, use Defensive-Ground-Kicks - sitting on one side of your butt, kicking the attacker's knees if he comes near (using your hands to swivel yourself on your buttock as needed if he tries circling you). Knees are very vulnerable. Use the bottom of your heel as the striking surface. If he grabs your ankle, kick his hands with your other foot. If he tries kicking you, kick his supporting leg's knee. Defensive-Ground-Kicks are an extremely powerful defensive position - and the safest for you (you can't fall down).

Mixed Strikes means simply to strike any target that’s open, such as Finger-Whips to the eye (or a Thumb-to-the-Eye ), a Fist to his throat, a Knee-Strike to the groin, or a Heel-Stomp on his foot. Or simply repeat several strikes again and again.

Due to the nature of fighting – with constantly moving targets – most strikes miss while only a few actually score any damage. That’s why Mixed Strikes are the best options. Don’t flail wildly, instead quickly choose your strikes. If your opponent protects a target, immediately shift your attack to other targets. If he protects those, then again shift your attack.

1. PRIOR MENTAL PREPARATION: as taught in Optimal Mindset.

2. ATTACK THE ATTACKER the sooner, the better.

3. CONTINUE THE ATTACK: follow your initial strike with Mixed Strikes (above) delivered with controlled aggression, until you can flee to safety.

4. USE ONLY THE SIMPLEST TECHNIQUES, delivered ruthlessly.

6. FIGHT DIRTY: Use anything nearby that can be used as a weapon (see Improvised Weapons).

7. EXPECT TO GET HURT: see Wounded.

8. IF YOU GO TO THE GROUND: use Defensive-Ground-Kicks (above) or the Clinch-Attack (see Self Defense Techniques).

Deter a predator - beforehand - by holding Pepper Spray & a Personal Security Alarm (noisemaker or screamer) in plain sight. Those pages tell you how to use them most effectively.