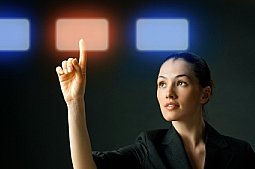 Posturing is the 1st of the 5 Victim's Options. Potential prey might well deter a predator by posturing as a tough target – too much trouble. They prefer to target what look like easy pickings.

Smaller people or the elderly obviously present less of a physical threat, but not wanting to be rude also makes you vulnerable to a sneaky trap. Now is the time for you to learn how to look like a tough target.

Marla, an actress in New York City,, opted for posturing when she was threatened with date rape. She faked a mental meltdown by nonsensically sobbing, “I killed my baby, I killed my baby.” She grew more manic and actually scared away the creep. He’s lucky he fled before her growing "lunacy" burst into a shrieking attack on him.

Marla chose the first of victim's options - posturing - and was about to change tactics by maniacally attacking him, then suddenly running off howling. No one would likely pursue such a lunatic. Faking a raging madness transforms the prey into a potent and confusing counter-threat to the predator. See Psycho Psyching in Optimal Mindset.

Victims often say, "I never saw him coming." Keep your head up and calmly aware. Make solid eye contact momentarily and don’t look down submissively. A deadpan poker face (an “iron face”) conveys confidence. Perhaps stick one hand ominously into a pocket as though you have a weapon ready. Better yet, hold Pepper Spray chest-high, visible, and ready for action. Have your other hand on a Personal Security Alarm (noisemaker or screamer).

Some street-wise women “walk like a man” – back straight, head and shoulders back, sending the message: “Don't mess with me.” Project a sincere willingness to hurt him. See Psycho Psyching in Optimal Mindset.

As a street-kid, though sometimes trembling inside, I learned to act tough and saved my butt many times. It’s all acting – the way frogs puff up, cats arch and hiss, and dogs bare their teeth and growl. Pretend to be tough – and be truly ready to become pit-bull-like if you must. Project a tough attitude to help ward off a predator as well as help motivate you to fight for your life like a mad dog if you must.

When you're frightened, you stop thinking with your human forebrain and begin thinking with your midbrain (which is nearly identical to the mind of an animal) and it is the animal who growls or snarls with the most ferocity who has the best chance of scaring away the threat.

Oftentimes, a potential victim presenting herself as a formidable challenge – glaring menacingly, snarling obscenities, or behaving fiercely defiant – will back off an apparent threat, as one of my personal experiences shows:

A pair of simple Bic ballpoint stick pens (minus their caps) served me well one afternoon in 1997 while daydreaming in the last car of a Manhattan subway train. I hadn't noticed that the car had emptied at stops along the way – leaving me all alone. That's a situation that wary New Yorkers always try to avoid by quickly moving to a crowded car.

Sure enough, four punks in their late teens suddenly strutted in and surrounded me. Two sat on the bench on either side of me, two on the opposite bench facing me. They began casually "cleaning their fingernails" with boxcutter razors while smugly eyeing me – a blatantly ominous prelude to carving me up.

I tightly grasped the Bic pens from my waist-pack in my fists: one in the "ice-pick grip" ready to repeatedly "overhead-hammer-swing" into the side of a punk's neck, the other in the "key-into-doorlock grip" ready to repeatedly jab into a punk's eyes and throat – or any parts of them I could reach with a frenzied barrage of strikes. (By the way, a puncture wound is more debilitating to organs, arteries, and muscles than a slash from a razor, though less ghastly in appearance, and the pens would penetrate their winter clothing – though I doubt the punks knew this.)

I sat crouched forward on the edge of my seat, scowling at the two across from me while peripherally watching the other two beside me, in obvious hair-trigger readiness to furiously savage the first punk to move toward me – then the others. Out of extreme fear for my life, I craved to annihilate all four of the evil punks. It helped tremendously that I was 6'3" and 222 lbs. with a hard street persona while silently exuding, at that moment, a seething bloodlust.

Reading my fervent intent that even a blind man could see, the punks casually swaggered away to hunt for an easier victim, leaving me alone once more – very lucky to be neither robbed nor slashed by four razors. The entire encounter lasted maybe half a minute, without a word spoken.

Four against one would've been a bloodbath, mostly mine. But they knew I'd do serious damage to at least one of them, and none of the four wanted to be the one.

Now, had they wanted only my money (or if they’d instead pulled out guns), a wise victim would simply give it to them. But muggings with no eyewitnesses nearby have far greater potential for extreme violence. And in that breathtakingly sudden crisis, my Intuition screamed that I was in grave danger beyond being merely robbed. I never doubted that I had to face their deadly threat with a do-or-die counter-threat. See Acting.

NOT ALL THREATS ARE QUITE SO OBVIOUS

On a summer's day in the mid 1970's I was deep in a Michigan forest with my son's mother and then-wife, Mary, and my childhood buddy, Harry Church, a Marine combat veteran. Sitting on the ground and eating sandwiches, we were taking a break from plinking at tin cans and such with a shotgun and rifle when two guys on motorcycles suddenly roared to a stop in front of us.

Spewing friendly chatter, they barged into our space and headed straight toward my shotgun leaning in the crook of a tree ten feet away from us – our only gun visible. My intuition sensed that they wanted to grab my shotgun and put us at their mercy. Not a pretty picture.

Fortunately, my rifle lay behind me where I sat. Casually standing up without a word and pointing my rifle in their general direction, I stepped sideways a bit to take Mary and Harry out of my ostensible line of fire. The two intruder's nonstop friendly chatter suddenly raised in pitch as their course sharply reversed back toward their bikes where they quickly bid us a cheerful farewell. We three hadn't spoken a word throughout.

I knew the shotgun was loaded and was glad they didn't know my rifle was empty. My posturing was merely a bluff yet scared away the apparent threat anyway. Of course, any gun gets attention.

But had we truly been in danger of becoming victims of even a mere robbery? Harry had also sensed alarm but had no firearm nearby. Since we'd both grown up on the streets of Detroit, we both have suspicious minds, but Mary, too, felt a foreboding – the intruders reeked of it. Besides, they instantly reversed course at the sight of my rifle without my speaking a word – yet acted as though nothing was happening! That's how predators act while trying to maintain a pretense. Wouldn't innocent intruders have shown at least a little surprise when a rifle was suddenly pointed toward them?

Would peaceable men, uninvited and unwelcomed, have barged in on strangers out in the boonies? I'm convinced they were friendly predators cruising for victims. I don't care in the least if they really were innocent fools and I was rude. My safety comes first – not the feelings of fools.

Even without her own gun, a potential victim can use the first of a victim's options - posturing - very effectively by always having pepper spray ready in an instant's notice. Or, if walking through a parking lot, say, casually hold the pepper spray visibly up and ready. Most likely, a predator will look for another victim. If necessary, demand, "Stay away from me!" If he continues toward you, pepper-spray him and activate your personal security alarm (a.k.a. screamer or noisemaker) as you flee.