Fighting Options - the best strategy to precede your escape from an attacker is a Sucker Punch. Know this: Surprise is a huge advantage. 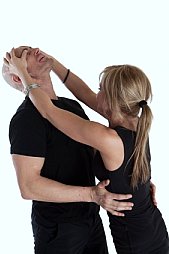 The slang term “sucker punch” means to “sucker” or surprise someone by launching a sneak attack without any warning ("telegraphing"). The Sucker Punch must be delivered from within close range – from within an arm’s length. Attacking first has a major advantage. It can be any strike – not only a punch – or it can be any weapon (almost anything nearby can be thrown or smashed into his face, head, throat, or eyes). This should be followed with additional strikes to reduce his threat to you and allow your escape.

[NOTE: This is self defense strategic advice - not legal advice. Ask your attorney how these fighting options apply to you.]

All humans have a reaction time of at least a half-second to any stimulus, such as a puddle about to be splashed onto you or a dog about to lick your face. You see it coming but can’t dodge it in time. Even if you’re anxiously anticipating catching a toddler on the verge of falling, you’ll often react just a tad too late. Trying to swat a fly is another example. A half-second is actually a long time, especially in physical combat. You must punch first or get punched yourself. 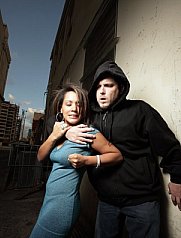 "Telegraphing your intent” spoils the surprise by tipping off your target beforehand. Don’t threaten or adopt a fighting stance. Acting submissive makes him least likely to expect a sudden sucker punch.

Avoid even subtle body-language signals, such as dropping your chin, widening your eyes, tensing your body, or hauling back your fist to “wind-up” for a punch.

With maximal intent to cause harm, slyly launch your strike with maximal surprise from wherever your body-weapon (hand, elbow, foot, knee) happens to be.

How to defend against Sucker Punches

It's not easy - that's why they're such good offensive fighting options. Nevertheless, stay more than an arm’s length away (the further, the better) and watch for him telegraphing his intent to attack. Use your peripheral vision to watch his hands, they’re the most likely to harm you. Be ready to dodge his grab or punch, then run. If you are knocked down, stay down and immediately assume the powerful Defensive Ground Kicks position (in strategies) to enable your escape.

How to use a Sucker Punch

Of course, you must be close enough, within reach. Use Startle Speed – the speed used to pull your hand away from a hot stove. Do not telegraph your intent. Attack with the same strike repeatedly or follow your Sucker Punch with the Mixed Strikes in strategies (hand, foot, knee). Continue striking until you can escape from danger.

The best Sucker Punch of all are the “Finger-Whips-to-the-Eyes.” That’s whipping your hand and wrist loosely as though you’re flicking water off your fingertips. This allows all four fingertips (not your thumb) to strike the eye. They:

1. are the fastest of all strikes and can be repeated rapidly,
2. don’t require strength, only speed (see Startle Speed above),
3. are the quickest surprise attack that doesn't telegraph your intent.

You can then target his testicles. His two eyes AND his two testicles add up to:

His Four Balls (his throat is your fifth target) 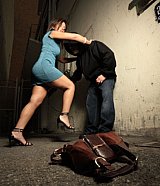 Eyeballs have the same extreme sensitivity as testicles - his "four balls" are a man's most vulnerable targets (followed by his throat).

The slightest impact to an eyeball causes an autonomic reaction of snapping the head back. That exposes his throat for your fist to strike his "Adam's Apple" (thyroid cartilage) which will impede his breathing and cause gasping.

After an eyeball-strike (and an optional fist-strike to his throat and/or a knee-strike to his groin), it's far less likely that he'll chase you.

Target his four balls and throat. STUN & RUN to safety and call the police.

Practice this repeatedly in slow-motion. Then practice this fiercely at full speed while vividly imagining yourself being attacked and succeeding in your escape. This mental rehearsal is key.