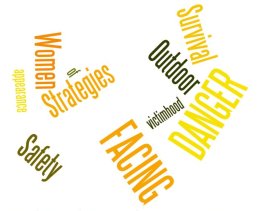 The most important outdoor safety tips for women are survival strategies for facing robbers, rapists, kidnappers - and how to escape.

Some criminal predators watch their prey for days before striking and, the more stable your outdoor routine, the easier it is for them to attack. Other predators read you quickly. They all want prey who avoid being rude. It's far better to experience mild guilt at walking away from a potentially legitimate request for help than being robbed, raped, or kidnapped. Predators target prey who appear to be easy pickings.

Victims often say, "I never saw him coming." Keep your head up and calmly aware of your surroundings. Make solid eye contact momentarily and don’t look down submissively. A deadpan poker face (an “iron face”) conveys confidence. Perhaps stick one hand ominously into a pocket as though you have a weapon ready. Better yet, hold pepper spray and a & a personal security alarm chest-high, very visible, and ready for action. A predator will likely choose another target.

Some street-wise women “walk like a man” – back straight, head and shoulders back, sending the message: “Don't mess with me.” Project a sincere willingness to hurt him.

As a street-kid, though sometimes trembling inside, I learned to act tough and saved my butt many times. It’s all acting – or "posturing" – the way frogs puff up, cats arch and hiss, and dogs bare their teeth and growl. Pretend to be tough – and be truly ready to become pit-bull-like if you must. Project a tough attitude to help ward off a predator as well as help motivate you to fight for your life like a mad dog if you must.

Don't turn your back on anyone you don’t trust – that invites an attack you won’t see coming. If he begins to approach you, take an aggressive stance, put one hand in a pocket as though you have a weapon ready, raise your other hand in a “STOP!” gesture, and fiercely command him to "Stay away from me!"

Better yet for outdoor safety, also hold pepper spray and a noisemaker visible and at the ready. See sources below.

If he keeps moving toward you – that's your early-warning-sign that he's probably a predator – either flee or activate your noisemaker and use your pepper spray.

"Fight or flight” are the two most famous options. Martial arts' theory often adds surrender to the mix. I’ve added two more options: posturing and outsmarting, and aligned them all with FBI advice (and cleared up their confusing terminology):

1.Posturing as a tough target (criminals want easy targets). If that doesn’t work:

3.Outsmarting: by talking your way toward escape. If that doesn’t work:

4.Surrendering and hoping to survive; or better: to set up an escape, maybe aided by:

5.Fighting like a mad dog to allow your escape. Stun & run.

A sudden threat forces you to make split-second decisions. Nonetheless, understanding your options now will help your intuition choose an option then.

Enhancing Your Options for Outdoor Safety

To deter a predator, carry a Personal Security Alarm (screamer or noisemaker) & Pepper Spray in plain sight. Those pages show you how to most effectively use them.

ROBBERY (Mugging): Give Up Your Money – Very Carefully

Nicole duFresne, her fiancé Jeffrey Sparks, and another couple were walking on a New York city sidewalk when two men appeared and demanded money. When Sparks pushed past them, one pulled a gun and hit him. Then they grabbed for the other woman's purse, and Ms. duFresne challenged them. A shot rang out, killing her.

After leaving a wedding in Washington DC, four guests were confronted by two gunmen. The two couples were given little time to comply before one gunman began hitting them. Then one threw his money at the assailants. Police believe this sudden action provoked the gunfire that killed him.

In a robbery, avoid eye contact, and do not fight for your money. Say you are reaching for your money – then move slowly! Robberies are usually spontaneous and unpredictable. Most robbers (muggers) are high-strung drug addicts anxious to avoid arrest, so give up your money without stalling or spooking them.

DON'T GO WITH A KIDNAPPER

As an Oregon woman was walking home, a man drove up, and through the open passenger window, he pointed a gun at her and demanded she get in his car. She took off running.

Never go with a kidnapper – it’s far too dangerous! React immediately. Either run, or if physically impaired, sit down so he'd have to drag you away. If he's willing to kill you there in a populated area (a 12% chance – per the USDOJ), he'll likely do worse, slowly, at a lonely spot with no witnesses around.

On the other hand, not all kidnappers kill...


A University of Wisconsin student was walking and talking on her cell phone when Antonio Pope ambushed her at knifepoint. He threatened to kill her if she turned around and saw his face. He bound her hands and drove her to his apartment where he raped her. Pope then dropped her off near where he’d kidnapped her.

Not all kidnappings result in harm (beyond rape), but most do. You have fewer options at a second crime scene and are fully at the mercy of a violent criminal. See Victim’s Options Overview, Kidnapping, and Fighting Options for all your survival strategies.