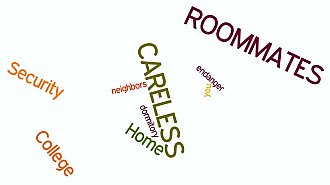 No group is any safer than its most careless member – and imposing sensible habits on careless people usually requires a tragedy to get their attention. And even then, the life-lesson is often soon forgotten and sloppy security once again runs rampant.

As a poet once said, “Each generation comes along living as fast and furiously as though it’s never been done before.”


Student apartments are criminal magnets
Palm trees, swimming pools, and fountains at Jacksonville’s The District student lodging lured 20-year-old Timothy Pemberton. Soon he was robbed and murdered there. College students are easy prey for predators because they often have a Superman or Superwoman complex and are oblivious to danger. His father said that if he had checked the crime rate at the complex, he wouldn’t have let T.J. sign the lease.

Then hope to get sensible roommates who always keep the doors and windows locked. Also, hope that their visitors are trustworthy. And remember that colleges do not screen students for criminal records – or for common sense.

Many of Jalon Lassiter's victims were New Jersey college students whose apartments were left unlocked. He and three other men entered an unlocked home to commit a robbery. The eight occupants who had gathered for a birthday party were restrained while three women were raped.

Parties are very vulnerable to intuders - the doors are usually unlocked. Or, if there's a knock at the door, someone usually opens it without first checking to see who's there. Knock, knock. Who's there? You'd better know...

Many college students tend to share quarters as though it's an ongoing party with people coming and going at all hours. Home security is a foreign concept to the newly independent. Do you really know and trust whoever happens to be there?

Ithaca’s Collegetown Creeper has invaded 18 women's bedrooms. A student heard someone walking around inside her apartment. Fortunately, her bedroom door was locked. His behavior has escalated to the point of cutting off clothing and rubbing lubricant onto a sleeping woman's vaginal area.

It's vital to fortify your bedroom - see Safe Room - especially if you have careless roommates like these:

A student’s voice trembled as she called 911 to report her roommate’s rape. The victim had been sleeping when the intruder entered through an unlocked door. Nearby, a household of seven female students say they rarely lock their door so that their friends can walk into the house at all hours of the day and night. It’s a matter of convenience and assumed safety. They don’t think of violent crimes happening in Oxford Ohio. They say the rape won’t change their habits. Oxford police say a lot of students don’t take even the most basic safety precautions.

Ah, the naïveté of the prey. None are so blind as those who refuse to see the risks of careless security - until crime strikes. See Crime Survivors & Victims' Loved Ones Recap

• Keep your doors, windows, and exterior doors locked at all times.

• If you lose an apartment or dorm-room key, change the lock as soon as possible. Any key lent out can be copied (whether or not it’s a “restricted” key).

• Make sure you know who is trying to enter your building before you let them in. You're not obligated to be graciously kind.

• Report suspicious people or activity immediately to the police.

• If you move into a house, first have the locks re-keyed by a locksmith. Former tenants - and any of their friends - might have a copy of your key! See Vivian's harrowing lesson at Cracks.

• Break-In: most homes are easy to invade. Learn what burglars hunt for.
• Walk-In: half of all home intrusions are through unlocked doors!
• Push-In: blindly opening the door if someone knocks. Better to use an inexpensive, portable, wireless intercom.
• Scam-In: believing a stranger's clever scam and opening your door, even an inch - see Push-In above.
• Mug-In: how to avoid being ambushed outside your home and forced in.