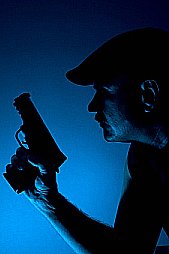 Mug-In: An attacker penetrates your home security by ambushing you outside your home and forcing you inside. You might be gardening, followed home, or leaving. It’s similar to a push-in, but begins while you’re outside, farther away from the door.

San Antonio TX police say the serial rapist follows women home before attacking them. When the victim opens her door, he produces a handgun and forces his way inside.

A Florida woman pulled into her driveway after midnight and saw a man crouching behind her car. In seconds, he had a knife to her throat and raped her.

An elderly Houston TX couple was returning to their home when a robber met them in their driveway with a lost dog story, pulled out a knife and forced them inside.

Five men ambushed a Memphis TN man in his driveway. Once inside, the man's entire family was handcuffed at gunpoint while their home was ransacked.

A Bainbridge GA man was followed home by a car but thought nothing of it until a man with a handgun approached him demanding money and forced him inside his home.

Modesto CA police are searching for two women who approached another woman who was standing outside her apartment, forced the woman inside, then beat and robbed her.

Do NOT go inside with him! You’re better off outside where he has fewer options. Whatever violence he’s willing to use outside will be worse inside. Do not believe any of his promises. Criminals lie.

Scan your surroundings before exiting your home. Look for anyone hiding or lurking nearby.

Or, if anyone seems to be following you when you're driving home, don’t go home. Circle the block to see if you’re still being followed. If so, drive to an active public place and stay in your car while blowing the horn, and call the police. When you do go home, look around before exiting your car. Hold pepper spray and a personal alarm (noisemaker or screamer) at the ready.

Or, if you're on foot, have your spray and alarm in hand, and go to a neighbor's house or active public place.