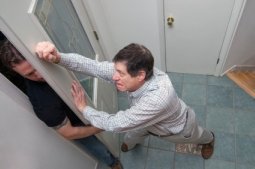 A Push-In can happen when you ignore home security and answer the doorbell by opening the door without knowing who's there - and an attacker bursts in (or brandishes a weapon).

Or if you do use a peephole and intercom, he’ll use a scam to entice you to open the door – then push in. Increasingly popular with predators, a push-in provides extra benefits only when the occupants are at home: their wallets and car keys, the locations and entry codes for hidden safes, and the option of raping the victims.


Winnie Fang heard a knock and, in one of the safest neighborhoods in the San Francisco Bay Area, opened her front door without first checking who was there. Two gunmen burst in spraying bullets. She was shot in the chest, but survived. Her husband was fatally shot.

Sharron Blais heard a knock on the front door of her Daytona Beach home and opened it without first checking who was there. Two gunmen burst in, knocking her to the floor and screaming they were going to kill her. Suddenly, every illusion she'd ever held about her safety was shattered.

Ulysses Towe heard his doorbell ring at his Atlanta-area home and opened the front door without first checking who was there. Two teens armed with a shotgun and a large knife forced their way in and ransacked the home while screaming threats. His wife clasped her hands together and told a gunman she was praying. He said: "I'm your god now. Pray to me."

Home invasion victims are routinely tortured to reveal the whereabouts of valuables. Convict Stephen Harding boasted that once he’s got your wife and kids, when you hear your kid screaming 'Daddy, Daddy,' you’re at his mercy.

Donald Ursem was always careful when he answered his Las Vegas door. The one time he didn't check he was fatally shot in the head.

Predators Know How To Trick Their Prey

In the mid-1980’s, a gang invaded Chicago-area homes to rob, torture, and force family members to have sex with each other. They'd put a magnetic, fake florist sign on a van and park in front of a house. Two men, with large bouquets of flowers hiding their faces, rang the doorbell. The homeowner, seeing flowers and a florist delivery van, opened the door.

A series of home invasions in Houston each begin with a knock on the door. When the homeowner opens the front door without first checking who was there, two gunmen storm inside. In some cases, the homeowners asked who it was, and it was just a mumble, so they opened the door to hear them better.

Mr. Paul heard a knock at his Dallas home. When he didn't see anyone in the peephole, he opened the door. A man pushed his way in and stabbed him.

Handsome serial killer Derrick Todd Lee came to Diane Alexander's Baton Rouge home and said he was lost. When he learned that her husband wasn’t home, he forced his way inside and tried to plunge a pair of scissors into her eyes. But her adult son came home and caused Lee to flee. She may be the only one to survive the handsome monster's attacks.

In a sleepy Ontario town, a man pounded frantically on the door of a home, yelling out that he needed directions to a hospital for his injured son lying in his car. A woman, cleverly duped, opened her door to help him. He pushed-in, raped, and murdered her.

Would you have breached your home security by opening your door – or instead called 911 for an ambulance or a police escort?

Police Safety Tips: Kids Home Alone | Arlington TV – Arlington, VA Police Department | video 1m15s | Arlington is a safe community. But when it comes to your kids, you can't be TOO safe. If your kids are spending time home without you, make sure they know these safety rules!
►Do not have friends over without an adult in the house to supervise.
►Keep your doors closed AND locked when you're home alone.
►Do not open the door for anyone even if you know the person.
►Don't answer the phone and never tell anyone you're home alone.
►Make sure you have a trusted neighbor you can go to if you need help and a list of emergency phone numbers to call.
►And remember, never hesitate to call the police if you think you spot suspicious activity. Call 9-1-1 for emergencies. For more Safety tips, go to arlingtonva.us/police .

NEVER blindly open your door for anyone you don’t know and trust. Install a peephole and a wireless doorbell Home Intercom System for communicating through your fortified, and locked door. Also see door reinforcement. Two gunmen forced their way into a man’s Chicago apartment after he opened his door without first checking who was there. He could think of only one way to make it out alive – he dove headfirst through the window of his first-floor apartment and ran for his life.

If you are pushed-in, do not remain inside with him (even if other family members are home). To avoid becoming a hostage at their mercy, flee to the outside for help. That might prompt him to flee as well because he’ll know that you’ll be calling for help - hopefully from a nearby neighbor. Since the national average police response time is ELEVEN minutes (if you're lucky), yell out that you’re getting your “neighbor the cop” - which might prompt him to flee as well. Now you see why it's better to guard against push-ins before it's a life-or-death crisis.

Safeguard your home security even if you live in Sleepy Valley - predators often hunt where the prey least expect them.

Make sure all your family members use these home defense strategies - because "a chain is no stronger than it's weakest link." The most cautious prey will more likely be spared.