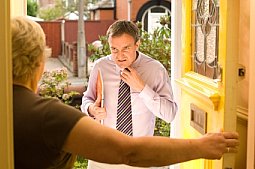 Scam-In: clever lies to get past your home security. Is your naiveté endangering you? Learn from crime victims about home defense.

The countless flimflam scams of male and/or female predators all have the same goal: getting into your home to rob or attack you. Your name on your mailbox and any clues from window peeping are a big help to them.


The home invasion began when a woman knocked on a door in a quiet California neighborhood asking to use the phone. When the homeowner let the woman in, two men with guns followed her.

In suburban Pittsburgh, 90-year-old Shannon Dale was clearing snow from his sidewalk when a man approached and engaged him in conversation as three other men sneaked into his house. The man then followed Dale inside where the four robbers bound and beat him. His wife, Freda, 89, already bound, died of a heart attack as her husband lay helpless nearby. It happened on a country road where everybody had felt safe.

Simple security-products-alarms or DIY Home Security Systems with a panic-button and a keyless touch-pad deadbolt lock – with remote-control pocket fobs – might well have saved the Dales.

Their house would've been locked while he was outside, and as soon as he sensed trouble he could've sounded the alarm with his remote-control unit. Since the other invaders wouldn’t have already gotten indoors – and with a siren shrieking – the criminals likely would've simply fled at that point. At the least, Mrs. Dale probably wouldn’t have been exposed to them.

Jeremy Rausch was packing something in his car when a male passerby started a conversation with him – while his female companion sneaked into his Oregon home. Jeremy's wife called out that someone was in the house. Jeremy went inside, followed by the man who shot Jeremy in the head. The area recently had 13 home invasions – and all of them involved doors that had been unlocked or had been left open.

On the Oprah TV show, to demonstrate how easily people fall for a scam-in, a hidden camera recorded a male staff-member wearing an ordinary business suit with a phony police ID tag typed on an ordinary typewriter with ordinary paper and knocking on the doors of 100 homes - pretending to be a police detective. Every single one invited him in.

Shortly after Mark Schwab was released from prison for a sex offense, he saw a picture of an 11-year-old boy in a Kentucky newspaper. He told the family he was writing an article about the boy for the newspaper, got him alone and murdered him.

Two predators knocked on the door of a Pennsylvania home claiming to be looking for a lost dog. When the duped homeowner opened his door to get a better look at the photo they held, they pushed-in and robbed him.

A woman asked a Tennessee homeowner for permission to swim in his backyard pool. He agreed and led her to the pool. Then she asked him if she could swim naked and he again agreed. She swam for about 20 minutes while he watched. She then dressed and left. Finally, he went inside and found that his home had been burglarized.

Roger Broadway had just been released from prison when, in front of a halfway house, he was hired as a door-to-door magazine salesman in Tennessee. His employer went around in a van picking up any salespeople they could find. Broadway knocked on the door of Eskalene DeBorde, 66, got into her home, and murdered her.

Two men were dressed like FBI agents and had fake ID to gain entry into a Florida home. When the victims let them in, they were bound, tortured, and robbed.

URGENT SCAM-INS TO PRESSURE YOU

Scam artists try to panic victims, saying “there's been an explosion down the road,” or “there's a water leak and we've got to test the water.” Because the “distraction burglary” happens so quickly the victim doesn't have time to think clearly.

Travelers (transient criminals), usually conduct roofing, driveway and home improvement scams. They quote a low price, and then when the work is done, the price skyrockets and the work is shoddy. Home invasions are more recent. Sometimes, a female comes to the door to be the distraction. “She may say she has car trouble. Then she'll ask for a drink of water. When the homeowner goes to the kitchen, she follows. Then her partners ransack the house.

They’ll knock on your door and call out your name (it's on your curbside mailbox). When you open the door, you’ll get a gun in your face.

Despite massive publicity in the early 1960's after the Boston Strangler's first push-in/murder, all of his subsequent victims had opened the door when he knocked. A police detective said, "My God, you'd think after eight of them they'd stop opening the door for him." Yet a total of 11 victims opened the door until Albert DeSalvo was finally arrested.

Some gangs use a tearful boy and the tale of a lost pet to scam homeowners. The youngster knocks on a victim's door then tearfully claims his pet has wandered into their garden. While the homeowner helps the boy search for the phantom pet, the boy's adult accomplices ransack the house.

Children may scam their way into your home to attack you, such as the three preteen sisters in Chicago who robbed and killed an elderly neighbor. In the 1990’s alone, preteen children murdered more than 500 people in home invasions.

Get it? Predators will use any scam imaginable to isolate and attack you.

ALWAYS use your peephole and doorbell intercom, and NEVER open your door – not even an inch – for ANY stranger. Don’t give them the opportunity to push-in. Don't open the door to strangers asking for help with a stalled car, lost dog, etc. Tell them through your intercom you’ll help by calling 911.

Phony uniforms are easy to get (even police uniforms and ID). A predator might pose as a bible student, building inspector, census-taker, charity fund-raiser, deliveryman, florist, minister, repairman, salesman, or utility worker, and may have a female or child as an accomplice. Bad weather may cause you to pity them.

Insist on photo I.D. (linked to his employer) held up to your window. Look for his company vehicle (not with a magnetic sign). Then call his company to check (get the number from the phone directory, not from him).

If a woman pounds on your door claiming she’s being chased (a common scam), tell her you’ll phone 911. Think about it. If it's not a scam and a violent predator is indeed chasing her, he might burst in behind her when you open your door! Are you ready for that?

Instead, by not letting her in, activating your alarm, and phoning 911, you and your family will be safe. And your alarm may well scare away her “attacker.” Be very careful about trying to be a hero. See more about this gnarly ethical issue in Rescuing a Victim Safely

Predators often hunt where the prey least expect them. Safeguard your home security even if you live in Sleepy Valley.

Make sure that all your family members use these home defense strategies. Predators will always find prey – but cautious targets will likely be spared.