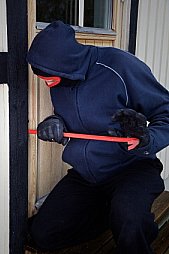 Home security has two components: First, fortifying your home with hardware and electronics. Second, insisting your entire family always use them properly.

Break-In: An intruder breaches your home security either by quietly burgling an opening or smashing his way in.

Four intruders broke through a Montreal home's front door, beat the homeowners and raped a young female visitor. The invaders are suspected of five other home invasions in the area. In one, two elderly couples were bound and one man was scalded with boiling water.

The Post Traumatic Stress Disorder (PTSD) of an outdoor violent crime often causes a survivor to not want to venture outdoors at all. But when the crime scene is the very cocoon of their homes, victims are especially traumatized. Many victims feel anger, fear, and ironically, guilt. They often blame themselves for not having been more careful. Psychotherapy for PTSD generally involves helping victims regain a sense of control over their lives. See Crime Survivors - Recap for help.

In South Carolina, three gunmen burst through a home's front door, beat the father to the floor and demanded money. They also attacked his daughter with cerebral palsy – bashing her head and breaking her arm. At that point, the mother ran out a door to the sound of her daughter screaming, knowing she had to get help. A neighbor called 911 and grabbed a shotgun. He confronted the suspects and they ran to a van. He shot once at the van as they took off.

Coming Home to a Burglary

The Whitaker family of four was returning to their Texas home where a surprised burglar shot all of them.

If you arrive home and notice signs of a burglary, do not enter – the burglar may still be inside. If you do confront a burglar, allow him to escape. Or, you should flee and call the police. Too many victims, men especially, try to capture or punish a burglar, which leads to a dangerous escalation of violence. Your valuables can be replaced.

One woman living alone rings the doorbell upon arriving home to alert any burglars to flee. Then she opens the door slightly to see if anyone has removed the small pile of money she’d casually strewn in plain view on a table just inside the door (visible only from indoors). If the money is still there, she assumes she’s indeed alone.

Types of Burglars and Invaders

• Professionals (often called “cat burglars”) are almost the only ones able to defeat the more sophisticated home defense measures. A tiny minority of all burglars, they prefer businesses or very wealthy homes and rarely target an ordinary home. They’re seldom dangerous unless trapped.

• Drug addicts, unskilled, unpredictable, and usually high on drugs, commit up to 90 percent of all burglaries and home invasions but rarely plan them well. Terrified of arrest and drug withdrawal, they’re desperate, volatile, and often convinced you’re holding out on them. Irrational and prone to violence, they are very dangerous.

How Predators Choose a Home

• Predators wear disguises and use props to look harmless. Male and/or female, they may drive a vehicle with a phony (magnetic) business sign, push a baby-stroller, walk a dog, jog past, wear utility uniforms, or pose as sales-persons.

• Some knock on your door to ask some flimflam question (or knock then duck out of sight). They want to see if anyone is home, if you're careless enough to open your door to a stranger (making it easy to Push-In), if you have a dog, etc. They want to assess your security – they’re sniffing for prey – and no family is any safer than its most careless member.

• Most prefer daylight, others the night. They can strike anywhere, anytime.

Read of a debate between two ex-burglars: How to Protect Your Home From Burglars, According to Burglars

Burglars usually flee from a confrontation, and become violent only if chased or trapped. But what if an intruder isn’t merely a burglar? What if he doesn’t flee from you or doesn’t want you to get away from him?

If an Intruder is Chasing You Through Your Home

If you don't have a safe room, do not stay indoors even if your kids are at home. Any one of you escaping will bring help more quickly (see hostage taking). Better yet, fortify your home ahead of time.

Fortify your home by burglar-proofing it with these hardware and electronics (and always use them):

Even if you live in Sleepy Valley, safeguard your home security - predators like to prowl where the prey least expect them.

Prevent home intrusions by making sure all your family members use these strategies. Of course, predators will always find prey – but the most cautious targets will likely be spared.