"The only thing we have to fear, is fear itself."

The stunning savagery of killers makes people flee, hide, and fight back feebly. All too often, victims simply do nothing to save themselves, and their pathetic timidity made it easy for their killer.

Most people are simply not ready for human savagery and just don’t know what to do. When they look straight into the face of evil they are overwhelmed and baffled.

A victim who is not willing to 'do or die' in the face of evil may well die.

– to paraphrase Lt. Col. Dave Grossman, US Army Ranger commander and West Point psychology professor, in his book “On Killing."

British military historian John Keegan’s The History of Warfare tells of warriors worldwide using psychological warfare by devising rituals to heighten their esprit de corps while at the same time intimidate their enemy – ranging from blatant warpaint, costumes, and manic frenzies to subtleties such as propaganda and sleep deprivation:

"Spirit – comprised of belief, hope, and willpower – is the supreme force of any fighting unit, from an individual to an entire army."

Ongoing military research focuses on why a highly trained soldier may freeze in a crisis while an untrained and ordinarily timid person may perform heroically. Our search for an answer begins with an excerpt from the U.S. Army Field Manual for Combat Stress Control:

Controlling combat stress is the deciding factor – the difference between victory and defeat – in all forms of human conflict. The art of war aims to impose so much stress on the enemy soldiers that they lose their will to fight. Both sides try to do this and at times accept severe stress in order to inflict greater stress on the enemy. To win, combat stress must be controlled. Elimination of stress is both impossible and undesirable in a crisis.

Performance will be impaired unless the soldiers' responses are simple and instinctive. Over time, exhaustion may occur if the soldier is unable to escape, overcome, or tolerate a severe stressor. Performance is enhanced with the spirit of hope.

The hero has overcome the paralysis of fear, and in some cases, has also called forth muscle strength far beyond normal capacity. He may have persevered in spite of wounds which would normally be disabling.

Heroes often have a difficult time describing it. A few may not remember the events clearly. More often they remember selected details with remarkable clarity. They may say, "I don't know how I did it. I remember being scared, but I saw what needed to be done and something came over me. It was like it was happening to someone else" (or “like I was watching myself in a movie" or “like an out-of-body experience"). 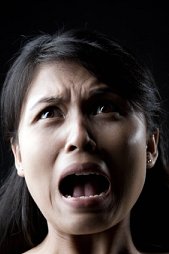 After a gun battle with criminals, a cop wondered if he had any nerve left. You always wonder about your nerve. Will you back down in the next sudden do-or-die crisis? Probably everyone wonders how they're going to react.

Fear is a survival trait. It releases your adrenaline hormone, making you quicker and stronger for fight-or-flight. Your face pales and hands cool as blood is diverted to your large muscles, and you tremble as your nerves rev up for action. Eyesight narrows to “tunnel vision” to focus on the threat. Nausea, sweating, and a dry mouth kick in as your pain tolerance skyrockets. Despite chaos, time seems to slow – allowing you to react clearly. This basic survival mechanism tries to save your life – if you accept it without letting “the shakes” panic you. Recognize this adrenaline rush and know that you can control and channel it to save yourself.

Panic or paralysis comes from a stunned confusion or sense of futility. Frozen, one is awed by the gravity of the moment or watches spellbound as a seemingly hopeless crisis unfolds. Panic can be contagious, so a group leader must stop any member from panicking (either with a face-slap or a shocking fact). Conversely, bravery, too, can be contagious.

You will “Beat Stress Like a Navy SEAL With This Ridiculously Easy Exercise” IF you practice often enough.