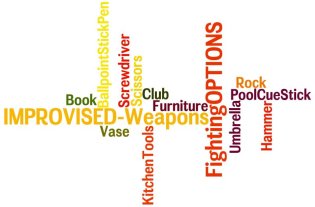 Fighting Options include improvised weapons ranging from prehistoric rocks and clubs to almost anything you can get your hands on.

Watching TV one night, Doug never heard the burglar entering his unlocked back door. When Doug went into his kitchen to toss a half-full glass of warm soda, he came face-to-face with the burglar gripping a kitchen knife. In a flash, Doug startled him by flinging the soda into his face, then palmed the bottom of the glass and slammed the rim into the burglar's face, gashing him. Next he grabbed a pan and bashed his head again and again. The burglar dropped the knife. Doug grabbed it and started hacking at him, then suddenly spun and ran outside the front door, yelling for his neighbors to call the cops. The burglar fled through the back door.

A New York City woman used her high-heel shoe to beat a man to death in a lover’s brawl. She was arrested still straddling her former lover.

Two teenage boys begged an elderly Des Moines IA woman, Juanita Burke, to let them in her door to use her telephone. Suddenly they pushed-in through her opened door and wrestled her to the floor. But the truly great-grandmother, though 93 years old, blind in one eye, and needing a cane to walk, pummeled them with her cane until they fled.

Everyday Objects as Self Defense Weapons

A simple ballpoint stick pen (a shaft-like pen minus it's cap) serving as a handy and superb knife-like weapon when used to stab an eye, throat, or almost any body part. Better yet, two pens can be used, one in each hand. Perhaps hold one pen in the "ice-pick grip" (pointed end sticking out the little-finger side of your hand, with your thumb covering the butt- end) ready to repeatedly "overhead-hammer-swing." Hold the other pen in the "key-into-lock grip" (pointed end held between your thumb and index finger with the butt-end secured against your palm) ready to repeatedly jab. These fighting options saved me - see Subway Encounter in Posturing.

A weapon is any object used to inflict harm. Beyond the obvious scissors, kitchen knives, screwdrivers, and hammers, your home is loaded with normally benign objects that can be used as makeshift weapons – anything you can pick up to throw at or club an attacker.

The hard edge of a book, a vase, or light furniture can be used to club him. A closed umbrella can jab like a pool cue-stick into his throat or eye. You can swing a belt in a sweeping fashion with the buckle on the striking end.

Sand, dirt, powder, loose change, or a pillow can be thrown in his eyes to surprise him and precede other strikes. Or throw hot coffee, and then jam the cup’s rim in his face. Or throw hot food cooking in a pan into his face and club him with the pan. Or spray his face with a fire extinguisher then club him with it. The wasp-killer spray in your garage reaches a good distance and can cause permanent eye damage to an attacker.

Away from home as well, makeshift weapons are all around – almost anything at hand. Your pockets, too, may hold a key (held ready to insert into a lock – or thrust into an eye or throat).

Of course, it’s always possible for a weapon to be taken away from you and used against you. That largely depends upon your willingness to wield a weapon with absolute intent to do grievous harm.

Simply brandishing a weapon in a threatening posture might not deter an attacker. Would you be willing to instantly use the weapon if your attacker continued to approach you anyway? You must ferociously attack or you’ll simply provide your attacker with your weapon. Never bluff. Use it or lose it. Attack him with the ferocity of a mad dog. Also, beware of him merely faking surrender only to launch a surprise attack after all. See acting and optimal mindset.

Learn Self Defense Techniques as a backup because your natural weapons (hands, knees, and feet) are always with you.