Stress control includes knowing beforehand what it’s like to be 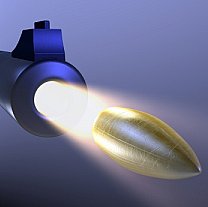 During an armed robbery at Loop Pizza Grill in St. Petersburg FL, employee Mike Robie faked a heart attack and fell to the floor hoping the two gunmen would run off. Instead, they shot Robie 11 times. He remained conscious throughout. He didn't feel a thing. He went into shock. He knew they were shooting him, but he didn't feel the bullets.

Former U.S. Army Green Beret Don Paul and former U.S. Marine Craig Huber, authors of Secure from Crime, write that the vast majority of pistol gunshot wounds (and puncture stab wounds) miss vital organs or arteries, thus, though stressful, aren’t physiologically fatal. Most bullet wounds are roughly as traumatic as a compound fracture of a bone. As stated earlier, it’s often the psychological panic (psychogenic shock) – and loss of hope – that can cause death.

Stabbing or shooting victims, if they notice anything, usually describe a sensation not as a quick, violent penetration but more like a blow that lands and doesn’t let up. A bullet’s heat causes a burning sensation.

Most gunshot and stabbing victims are still capable of fighting successfully. Many keep going without even knowing they were hurt. President Reagan didn’t know he’d been shot until he got to the hospital. But if one does know, it must be shaken off. It’s better to not look at the wound and risk stress panicking. Oftentimes, the difference between life and death all comes down to your self-control and will to survive – your choice, your willpower.

Pittsburgh police officer Dom Costa felt a bullet slam him in the right shoulder and a tremendous burning sensation and pain spread across his back. His hands began to get numb. Costa tried to calm himself, remembering that the right mindset could be the difference between life and death. He thought of his family. He hung on.

You may well overcome the stress of a serious injury through sheer willpower and choosing courage.