Survival options for surviving the worst of worst-case scenarios - lifesaving lessons from survivors. 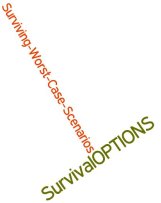 At a lakeside park, a gang of thugs attacked two teenagers – my buddy and me. My buddy was chased round and round a picnic table by a knife-wielding thug while the rest attacked me. I knocked out one thug’s teeth with my lone punch but was quickly downed with pummeling from all sides, and became the kicking target of a half-dozen thugs. To escape, I rolled sideways over and over past their circle then scrambled to my feet. At that point a dozen of our friends on the horizon began running to our rescue. The gang fled.

Obviously, facing multiple attackers increases your risk and decreases your survival options. You might choose to surrender and hope for mercy or pretend to surrender then explode in a preemptive attack then escape. If so, use the Clinch-Attack in Fighting Strategies on the nearest one while using him to shield you from the others. Perhaps do the same to a second thug. Try to keep your back to a wall or a tree. Attack like a mad dog. Do serious damage to at least one of them, then run off like a howling maniac hoping they decide you’re too much to pursue. If you fall, use the Defensive-Ground-Kicks in Fighting Strategies, then get up and run.

A gang rape (also known as a "party rape" because they frequently occur at drunken parties) is an escalation of a mob mentality. Often, stopping the first one with a furious self-defense stops them all.

Though similar to a gang rape, a mob or “wolf pack” attack is more frenzied. For instance:

During a parade in the summer of 2000, scores of young men rampaged through Manhattan’s Central Park terrorizing many dozens of women. One woman told how some attackers screamed "Go! Go! Go!" as others wrestled her to the ground, groping her and trying to rip off her clothing. She said, "I’ve never felt so terrified in my life. I couldn't see anything but the faces around me. I couldn't even see the skyline above me." She clawed, bit, and kicked her way free.

The “wilding” mob also attacked two honeymooning newlyweds from France. They restrained the husband while groping and stripping his wife naked. Breaking free, he lay protectively on his wife until the mob moved on.

Such a rabid wolf pack would have been very difficult to stop had they been just a bit more crazed. Fortunately, this mob wasn’t particularly intent on rape or murder and thus was more easily dissuaded.

Survival of a mob attack requires emulating the above survivor: claw, bite, and kick your way free. See Fighting Strategies.

Abraham Shorey slashed the screen of the victim's Ithaca NY apartment and climbed through the open window. She awoke with a man on top of her who threatened to kill her if she didn't stop screaming. She bit him when he put his hand over her mouth, and fought for her life for 10 minutes, kicking the knife out of his hand and running outdoors to safety.

Never Give Up Hope

Phillip Clopton kidnapped a 15-year-old Kentucky girl, took her to a campsite and raped her for weeks while she was handcuffed to a tree. Once, when he failed to re-handcuff her and fell asleep, she shot him dead and escaped. Police found his diary, wherein Clopton wrote about killing and dismembering two 14-year-old Louisville girls and scattering their body parts across three counties.

In Florida, Sayeh Rivazfra was 8 years old when Warfield Raymond Wike raped her, cut her throat and – while she played dead – murdered her 6-year-old sister, Sara. She recalled "He cut my throat three times. I touched my neck and saw blood." She fell to the ground, playing dead. She kept her eyes closed and didn't move as she heard her sister screaming. "After a few minutes my sister stopped screaming," she said. She heard his car speed away and walked to the road where a couple stopped and took her to a hospital.