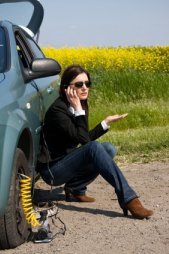 Returning to her parked car, a Sarasota FL woman found it with a flat tire. As she began replacing it with a spare, a Good Samaritan passerby insisted on helping. The Good Samaritan used the tire-iron to knock the woman unconscious and steal her wallet and car. He later confessed he had deflated her tire and waited for her

Four women were raped by the Interstate 65 serial rapist near Louisville who pulled them over by signaling that something was wrong with their car, then offering them a ride to get help. He pulled over three other women but they declined his offer and were not harmed. They all said he was very polite.

Instead, drive to a service station to check your car.

At an interstate rest stop in Kentucky, a man told a woman something was leaking from her car, then forced her into the back of the vehicle and raped her.

In Washington state, Cal Brown got Holly Washa to pull over by signaling that something was wrong with her car. He pulled a gun, drove her away, then raped and murdered her.

A Tucson woman stopped her car at a stop sign when a young man staggered in front of her car and seemed to fall unconscious. She got out to help and he robbed her.

A Massachusetts man stopped at a stop sign and a desperate young woman ran up begging for help because “someone was chasing her.” When he used the automatic control to unlock the passenger door for her, his own door was yanked open by her hidden male partner. Together, they robbed him and stole his car.

A Chicago man was parking outside a store when James Walton asked him for help. He agreed to drive him to his disabled car to jump-start it. A few blocks away, James Walton punched the man and stole his car.

Joanne Lees and Peter Falconio were flagged down on a remote highway in the Australian Outback by a man who claimed his car had broken down. Mr Falconio was shot dead, while Ms Lees managed to escape and hid in the bush for five hours while the killer searched for her. He finally gave up and left.

Bump-and-Rob: a car bumps yours in order to get you to pull over to "file an accident report." One early tip-off of a crime-in-progress is if his car is trying to barricade yours from leaving.

If you’re not sure, hold your license and registration against your closed window to let him read it. For car security, do not open your window. Do not hand him any of your paperwork. Do not open your door no matter what. Call the police on your cell phone.

Or, simply signal him to follow you, then turn on your flashing hazard lights and drive slowly to an active public area where you can more safely phone the police and wait for them.

Force-Over: If a Bump-and-Rob doesn’t work, the more brazen robbers may grow frustrated and simply force your car off the road. “Drive to Survive” author Curt Rich advises that if you must jump a curb, do so at an angle. Or quickly back up to escape. Otherwise, simply get all your passengers out and give up your car and money.

A driver in Harrisburg PA slammed on his brakes to avoid hitting a baby carriage that rolled in front of him and struck the carriage lightly with his car. He got out to check and found no baby inside. He then felt what he assumed was a firearm pressed into his back and was ordered to hand over his wallet.

Blockade: Any obstacle (whether trashcan, vehicle, baby carriage, or “pedestrian”) blocking your path allows criminals to trap you. A baby carriage is especially devious to shock and draw you out of your car. If at all possible to control your shock, for car security, stay in your car while calling police on your cell phone. And keep scanning your surroundings for suspicious activity before even thinking of getting out of your car to render aid.

Two cars followed a Galloway PA woman on a two-lane blacktop. One of the cars whizzed past her and disappeared up the road ahead. Moments later she saw it across the road, blocking her. She saw the driver slumped over. Suddenly, the driver of the second car was at her window with a knife, demanding money. He slashed her arm and ripped her earrings off, then both cars fled.

If it’s a trashcan or vehicle blockade, again, jump a curb or back up to escape. If two cars block you from front and rear (and suspicious activity begins), ram back and forth until you can escape. Otherwise, get all your passengers out and give up your car and money.

Eggs-on-Windshield: If eggs are smashed on your windshield while you're driving, do NOT operate the wiper or wiper/spray. The wiper will only make the mess worse by smearing it; the wiper/spray will mix water and egg into a milky goo that fully blocks your vision. Then you're forced to stop and become a victim of robbers. Instead, just drive away. If you need to, stick your head out the window to see ahead until you get to a gas station to clean your windshield.

Getting In or Out of Your Car: while going to or from your car, hold pepper spray and a personal security alarm (noisemaker or screamer) at the ready (or, since you already have your car-keys in hand, keep your thumb on your car horn’s emergency button remote-control pocket fob).

Garage Sneak-In: Two men followed a Fort Worth doctor and his family into their garage, put guns to their heads and robbed them.

See Shielding Your Garage From Sneak-Ins in security products - garage.

Hitchhikers: Scott Eizember was hitchhiking on a rainy day in Arkansas when Dr. Samuel Peebles and his wife picked him up. Eizember pulled a handgun, beat them and stole their van. He'd already murdered another couple earlier.

Do not pick up any hitchhiker - it's the worst breach of car security - and remember that 13 percent of armed robbers are female.

Phony-Cop:Two men in a car with flashing lights stopped and robbed five drivers in Chicago by impersonating police officers. In one robbery, they killed a young man as he walked past the car they pulled over. An Arkansas woman was pulled over by what she thought was a lawman with a flashing blue light on the dashboard. She was getting her driver’s license and registration from her purse and looked up to see a man wearing a ski mask pointing a gun at her. He raped her.

Rarely will a real plain-clothes police officer in a plain, unmarked car ever stop an ordinary driver. Yet roughly 25,000 people each year are victimized by false police cars (a plain car with only a flashing light and perhaps a siren).

If an unmarked “police car” signals you to pull over, and you’re not sure it’s really a police officer, put on your four-way hazard flashers and interior dome light, and slowly drive to the nearest well-lighted public area. Also call 911 on your cell phone to officially register your fears as well as find out if the cop is legitimate.

Taxicab drivers have been known to assault lone female passengers. To help protect herself while en route, a woman can first ask the cabdriver to turn off any music he might be playing. Then phone a friend (making sure the cabdriver can hear her) and announce her expected arrival time at her destination, AND recite the cabdriver’s ID tag # shown behind his seat or on the dashboard. That will remove a cabdriver’s anonymity and deter possible bad intentions. (If her friend doesn’t answer the phone, she can leave a voicemail – or pretend she’s talking to her friend anyway.) If the cabdriver has covered (hidden) his ID tag # - then simply call the police (911 in the U.S.).