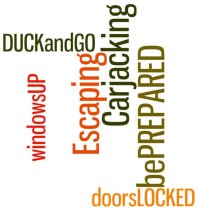 True car security means knowing how to escape from a carjacking.

• When Virginia Brewer stopped her car at a Columbus Ohio stop sign, a man with a knife jumped into her unlocked car and forced her to drive. She swerved her car and slammed on the brakes, hurling the man into the dashboard, stunning him. She then escaped on foot.

• When Jessica Paret stopped at a traffic light in Miami, Florida a gunman thrust himself through a window, demanding her car. She drove away with the man hanging on, and he shot her four times. She slammed on the brakes, he fell from the car and fled.


• The Oklahoma woman said somebody behind her was frantically flashing their headlights. Thinking there was something wrong with her car, she pulled over. A man walked up, flashed a gun, and took her to a lonely spot where he raped her.

ESCAPING from a CARJACKING

Duck and GO! If your motor is running and already in gear – and if your path is clear – duck down momentarily and mash down hard on the gas to escape. An automatic transmission is better for this – you might stall a manual transmission/clutch in a panic. If cross-traffic is blocking you, turn right into the flow (in the U.S.) to minimize a possible collision. Or:

Give up the car. Avoid eye contact, move slowly and never argue. Then flee as soon as possible. However, if you have passengers (especially females and/or children), forcefully say, “You can have our car and money but we’re leaving.” (Say this as though you expect agreement.) Females should try to exit through a door away from the carjackers. Or:

Floor the gas pedal, then stomp on the brakes! If a gunman jumps into your car, make him crash into the dashboard (he likely won’t have his seat-belt on) so you can flee on foot – as Virginia Brewer did in the above story. (Better yet, keep your doors locked beforehand.) Or:

Crash and run! If a gunman jumps into your car, accelerate to crash into anything nearby such as hedges, a tree, a ditch - then get out and flee. (For better car security, keep your doors locked beforehand.) See kidnapping and kidnap survival for more details.

As a suburban Detroit woman pulled out of her parking space, a man trotted toward her, telling her that her brake lights weren’t working. They opened her trunk to check for loose wires. Suddenly he punched her and shoved her into the trunk, slammed it shut and drove her away to rape her.

Andrian Marguiles was driving out of an Annapolis MD parking lot when two teens jumped in front of his truck. He slammed on his brakes to avoid hitting them, until one teen pointed a handgun at him. Mr. Marguiles floored the gas pedal and ducked down. The punks had to leap for their lives as he roared away.

For more, see 5 Tips for Safely Surviving a Carjacking