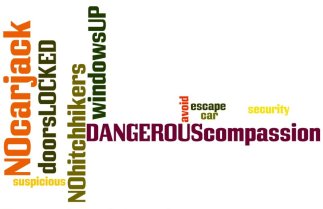 Car security includes avoiding carjacking (also known as hijacking) whenever you're in or near your car.

Beginning with the most obvious risk, know that picking up any hitchhiker is dangerously careless compassion:

Barry Thomas Grant in Hope B.C. asked a woman and her male companion for a ride. Then he hijacked her pickup truck, forced the male out, and drove away with her to rape her.

And remember that 13 percent of armed robbers are female:

A Memphis woman took pity on a seemingly helpless woman and her baby. While in her car, the mother pulled out a gun and shot her twice, then pushed her out and drove away in her car.

Pumping Gas with a Baby in Your Car

Put several old, unneeded keys on a small clip that attaches to your real keychain. Get in the habit of detaching the old keys from your keychain whenever you get out of your car to pump gas. If confronted by a carjacker, throw the old keys as far as possible. Hopefully, he'll chase them while you jump into your car, lock the doors, and drive away.

See Loading Your Car with a baby in your car at Parking Lot Safety.

Rudolph Wade abducted a New Orleans woman when she drove to a store. He entered her unlocked passenger door, held a gun to her head and ordered her to drive to where he raped her.

A Fort Myers FL woman went to a store and got back in her car when convicted felon Robert “Beast” Neal entered her unlocked passenger door, put a knife to her throat and directed her to an abandoned house where he beat, stabbed, and raped her.

See Escaping Carjacking for more on secondary crime scenes where you have far fewer options and odds of survival.

Jeremy Hayes and his wife's 14-year-old brother went into a store in Greenville NC while leaving their car unlocked and the keys in the ignition with Ginger Hayes in the back seat changing little Nicholas’ diaper. When they returned, the car was gone. Hours later and miles away, Ginger was found dead with her baby nearby. Andre Edwards, with 57 previous arrests, was convicted of her kidnapping, rape, and murder.

Though inconvenient, ALWAYS lock your doors for car security – it's better than tempting an amoral predator. Gamble in Vegas – not in your life.

A man was parked near Macy's department in Westchester NY store waiting for his wife. A teen walked up and asked for the time. Suspicious, he got out of his car to go into Macy's but the teen attacked him from behind, got his keys, and stole his car.

Once he became suspicious, he should have stayed inside his locked car and driven to park in the “fire lane” next to the store with his 4-way lights flashing and motor running (so he's not "parked" in a fire lane), and waited there for his wife.

When In or Near Your Car - Stay Alert

• When approaching your parked car, look for suspicious people loitering nearby and walk past if anything appears odd - or turn around and return to the store (or whatever).

• Once you're inside your car, always notice people nearby and keep your car ready for a quick getaway. Carjackers tend to avoid alert drivers on guard - who might have a gun ready.

• Carjackers prefer easy targets they can surprise - such as cars with the windows down, unaware of their surroundings (such as distracted drivers talking on a cellphone).

• Keep your eyes scanning for loiterers and checking your mirrors for anything suspicious behind you.

• When stopped in traffic jams (or at traffic lights, at train tracks, in fast food drive-throughs, etc.), stay at least 10 feet from the car in front of you, for a possibly quicker getaway. If you see someone at a traffic light coming toward you, be ready to take a gap over an island or jump the traffic light - IF traffic is clear. To lessen that danger, take a right turn into cross-traffic (in the U.S.).

• Keep your doors locked when filling your gas tank.

• Carjackers usually have a gun to coerce you to submit. If you're targeted and unable to speed away, BUT if you have a gun at the ready (if you're in a state that legally allows you to defend yourself) and the carjacker sees it pointing at him, he'll almost always flee rather than engage in a shootout (they far prefer easy targets). Again, see Escaping Carjacking for more tips.