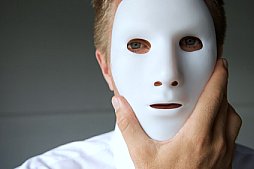 Masters of Deception: the criminal minds of friendly predators hunt and trap while wearing masks of goodness:

Wearing a business suit and claiming to be a police detective, serial killer Ted Bundy approached 17-year-old Carol Daronch in a Murray UT shopping mall, told her that her car had been burgled, and insisted she come see if anything had been stolen. She asked him how he knew where to find her. “I’m a cop,” he replied.


He asked her to lead him to her car and they found it still locked and undamaged. “Now we have to go to the police station to file a report,” he said as he led her to his car, an old Volkswagen bug. Suspicious about his odd police car, she asked him for ID. He quickly flashed a gold badge. Hesitantly, she got in with him but when he drove past the police station and headed out of town, she erupted furiously. Barely controlling and stopping the car, he tried to put handcuffs on her but she fought back ferociously and managed to escape.

As you’re calmly reading this, the holes in Bundy’s scam are glaringly obvious: he couldn’t explain how he found her, he didn’t know where her car was parked, her car wasn’t damaged, and he had no police car.

Caught by surprise and not as skeptical as you’ll soon become, she believed and obeyed him until it was almost too late. Bundy’s Death Row confessions revealed other cunning lures of a criminal mind from which his victims did not escape:

• With his arm in a plaster cast for sympathy, Bundy lured two women at a lakeside park, one at a time, to come help him with his boat. They went.
• He used crutches for sympathy to lure a woman at a motel to help him into his room. She went.
• In another motel, he faked a heart attack to lure a woman into a secluded hallway to aid him. She went.
• He asked a 12-year-old schoolgirl her name. “Kimberly,” she replied. “You’re Dad’s been hurt. Come with me,” said Bundy. She went.

Bundy deliberately kept conversations brief – it destroyed his savage sexual fantasy if he got to know the victim and saw her as a real person. He often used a sly dual strategy: reducing suspicions with an innocuous location, time of day, and appearance while gaining empathy with a clever scam delivered with artful acting and a silver tongue.

While on Death Row, Bundy was asked what causes the criminal minds of serial killers. He replied, "We are your sons, and we are your husbands, and we grew up in regular families." They seem oh so harmless.

A WOLF IN SHEEP’S CLOTHING

Serial killers look perfectly normal and may be above average in intelligence. You may very well have met one and found him charming or, if nothing else, forgettable. You may know a killer and never realize it – because he doesn't seem the least bit like a monster. They blend in with the rest of us without arousing the slightest suspicion. They have jobs, neighbors, relatives – maybe even spouses and children.

We fear monsters, not ordinary people. Ted Bundy and Jeffrey Dahmer were good looking and gifted at deceiving others, including the police. Equally nonthreatening was David Berkowitz, the Son of Sam killer. He looked like a nobody – just like all the many thousands of serial killers of the past, and just like the 50 to 2,500 the FBI estimates to be prowling at any time in the U.S.

They look like everybody else. The only difference is what lurks in their minds.

People are leery of eccentric loners, but cunning predators with masks of sanity make certain to hide their criminal minds and never appear eccentric. The benign Dr. Jekyll lures you to the trap before removing his mask to reveal the monstrous Mr. Hyde.

Altemio Sanchez was finally arrested as the Bike Path Killer of Buffalo NY. People are shocked that the serial killer was a church-going, socially functional, suburban husband and father, the family didn’t know, and lived like this for 12 years.

A common gambit used by pick-up artists trolling nightclubs for one-night-stands with carefree women is also used by some rapists: “You look familiar. Where have I seen you before?” Naïve targets (raised to be “nice”) respond with helpful clues as to why this stranger supposedly remembers her. Now a crafty predator can manipulate a gullible target into an impromptu date, or lure her into a trap, or stalk her later with the info she’s given. Even if someone does seem familiar, so what? Being "nice" makes her vulnerable to the criminal minds of friendly predators.

A serial killer in 1970’s Alabama, Jerry Marcus, confessed to using charm to make his victims feel safe. He said they didn’t suspect his shy personality was hiding a dangerous soul.

Neighbors of Richard White were stunned when bodies were found buried in his back yard in Casper WY. Neighbors said he had seemed like a normal guy.

See Newsletter #23 for criminal lures in newspaper want-ads and on websites such as Craigslist.

Defense attorney Sarah McKinnon was spiritually drained by Dennis Rader, a.k.a. BTK – the self-proclaimed Bind, Torture, Kill serial killer of Wichita KS. He wasn't the hideous monster that she expected from the massive evidence of horror against him.

Instead, he was a Boy Scout leader (an expert in tying knots), a church deacon, a family man, and a civic-minded citizen who constantly told police that when he wasn't torturing people to death, he was really a nice guy.

He was polite, kind, and gentle. In time, McKinnon began to see pieces of Rader wherever she looked. It became difficult to trust her instincts about people. She learned that most people involved on a personal level with a psychopath won't realize it until it's too late.

Deter a predator by holding Pepper Spray & a Personal Security Alarm (noisemaker or screamer) in plain sight. Those pages teach you how to use them most effectively.

JUDGING A BOOK BY ITS COVER

I once took a test to see if I could spot a serial killer's photo. The test had a pair of photos side-by-side – one of a serial killer and one of a Nobel Prize winner. Neither of them were well-known to the public. I had to guess which was which. There was a series of 20 pairs.


I chose correctly about half the time – which, statistically, is random chance. It blew me away. I'd always thought I had good radar for bad guys – but I didn't. It might've been because they were photos only and I wasn't able to judge their mannerisms (or "vibe") or the situation – otherwise maybe I would've scored a bit better. But probably not.


The point is: don't be too sure about your radar. It's better to err on the side of caution by playing it safe. See Spotting Danger and Friendly Predators