• Acquaintances of the victim commit roughly 85 percent of all rapes. Most of these are date rapes, but might be any acquaintance - friend, neighbor, classmate, or co-worker.
• Strangers commit the other 15 percent. 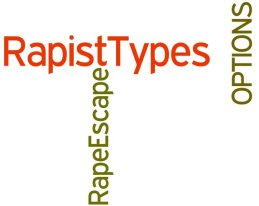 (a.k.a. Power Reassurance rapists) comprise roughly 70 percent of all rapists – and most acquaintance rapists. They capture and control a victim through verbal threats, just enough physical force to succeed, or through weapon intimidation. With fragile egos and seemingly harmless, they may suddenly become violent. They think women "play hard-to-get," don't really mean "No!" and crying is merely part of a woman’s act. Often they don't think of forced sex as rape and may actually believe you’re both simply having a good time “making love.” Afterward, he may again act kindly toward the victim as though no rape occurred.

Make it absolutely clear that you do not want sex. In a firm voice, threaten him with police and prison. If that doesn't stop him, immediately attack him with total intent to hurt him enough to allow your safe escape.

(a.k.a. Power Assertive rapists) comprise 25 percent of all rapists – and some acquaintance rapists. They feel a "super-masculine entitlement to dominate women." They're more macho, bragging, violent, domineering, and cruel than Gentleman rapists. They, too, think women are merely their playthings.

Try to get him to see your basic human rights and feelings. Talk and talk until he relents. If that doesn't stop him, immediately attack him with total intent to hurt him enough to allow your safe escape.

(a.k.a. Anger Retaliatory or Danger Excitation rapists) comprise 3-5 percent of all rapists – and most stranger rapists. More violent than the first two types, they usually strike suddenly and use physical brutality and humiliation – possibly including urination or defecation on the victim. Usually sexually impotent during the attack, they seek a discharge of anger more than sexual pleasure. These attacks are usually brief – striking, assaulting, and fleeing.

Immediately attack him with total intent to hurt him enough to allow your safe escape.

comprise 1-3 percent of all rapists and are usually stranger rapists. They delight in the victim's torment and anguish. Ritualistic mutilation and murder often fulfill his fantasy.

The sooner you attack him with total intent to grievously hurt him to allow your safe escape, the better. Fighting Options - Overview and Rape Escape Options - Ultimate help prepare your escape.

With a Gentleman Rapist, try very clearly explaining that you don't want any further physical intimacy. With the Control Freak Rapist, try to get him to see you as his mother or sister. See Victims Options - Outsmarting for more strategies. Trust your Intuition to guide you in each unique situation.

With the Revenge and Sadistic Rapists, you’re likely better off immediately fighting with absolute intent to disable him to allow your escape.

If Posturing isn’t working, Fleeing isn't possible, and Outsmarting is falling short, you have two options left: Surrendering or Fighting (all described at Victims Options - Overview). Dare you risk surrendering and putting yourself fully at the mercy of a criminal – or fighting? Only your Intuition can guide you.

Ultimately, responding to any violent rapist with an eye-gouging, throat-piercing, testicle-shredding kill-or-be-killed fight for your life may well be your best chance for survival. See Optimal Mindset.

Enhance Your Options – deter a predator by carrying a Personal Security Alarm (screamer or noisemaker) & Pepper Spray in plain sight. You'll learn how to use them most effectively.