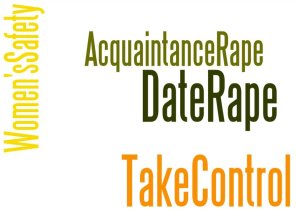 Women's Safety - Date Rape (or Acquaintance Rape) accounts for roughly 85 percent of all rapes. Here are a few cautionary examples:

SWM, 6'2", 200 lbs., Intellectual, and Romantic - This online personal ad goes on to say all the right, mushy things to dazzle women who dream of finding Mr. Right. But personal ads are notorious for puffing up the poster’s good side and leaving out the bad – or, in this case, the evil side. William Coday posted this while awaiting sentencing after being convicted of hammering two ex-girlfriends to death.

A 13-year-old girl accepted a ride home from school with a boy she knew and his three buddies. But they stopped at a Pasadena CA park to join another dozen boys who were drinking alcohol. The group ended up gang raping her.

She met "Rico" Turner at a Virginia tavern. He asked her for a ride home and directed her to a dark, dead-end road. There he slashed her with a razor and raped her.

Kelly was thrilled when a guy at her gym asked her out. Her girlfriend’s envy added to her exhilaration. Kelly’s dad checked FamilyWatchdog.us (showing the registered sex offenders living in your area) and learned he had been convicted of rape. Kelly canceled the date.

Right from the start women must take control and keep it. Begin by screening your prospective date. Even if you’ve seen him around or some of your friends seem to know him, he’s still a virtual stranger to you. He could be a serial date rapist whose victims never pressed charges. This uniquely traumatic crime causes most women to never report date rape to the police – thus a date rapist rapes again and again until someone finally stops him.

Know his full name, address, phone number, what he does, and who his friends are. Don’t reveal your phone number to a stranger. On your first date, meet him at a public place and have a friend with you (even momentarily) so he’ll know a witness has seen him. Don't allow yourself to be isolated with someone you don't know or trust. Know the level of intimacy you want in a relationship, and clearly tell him your limits.

Use taxis to get around – not cars, especially not his car. Pay your own expenses so he doesn’t think you owe him anything. Take an active role in deciding how the date will be spent. Don’t go anywhere with him unless he knows you’ve told others. Make him earn your trust. Stay sober. Always be ready to end the date early – better sooner than later – and always have a true escape route.

If using a dating service, keep your phone number private by placing the ad yourself rather than responding to one. Do not believe the dating service’s claims of screening clients. Criminals lie! See the sex-offender web sites below to check his background. But they're not totally reliable - and he may be using phony ID.

See Date Rape Drugs to learn from victims how to stay safe.

PROFILE OF A SERIAL DATE RAPIST

He’s usually a selfish egomaniac, really likes violence in movies and sports, and using alcohol or drugs. He lacks respect for other people - especially women, and you may notice he’s a bully or perhaps cruel to animals. He struts and swaggers as a “macho man,” has a sexist attitude, and never hesitates to selfishly impose his preferences on others. Some guys have all these flaws yet still get dates because they’re handsome, wealthy, or athletic.

Most men do indeed control their frustrated lust when women want to limit sexual activity. A man ignoring a woman’s clear refusal tends to confuse her and make her reluctant to fight – especially since a date rapist is more likely to pin down a woman rather than strike or choke her. Nevertheless, a woman has every right to defend herself with whatever severity is necessary (see Self Defense for Women and Ultimate Rape Prevention).

Early warning signs: staring at you, standing too close, touching you freely and suddenly, blocking your way and following you, enjoying your discomfort, ignoring what you say, calling you names you don’t like, using foul language, thinking he’s smarter than you, becoming angry when you disagree with him, and being rude and demanding of waitresses and women in general. In all, they usually display pushy, menacing, dominating behavior. Yet other date rapists seem as sweet as can be until they get you alone. Any talk or behavior that makes you uncomfortable should be addressed immediately – too many rape victims were too "nice."

Kissing and hugging, even flirting, might be seen as your consent to full sexual intercourse. Since many men tend to misinterpret women’s feelings, and some women tend to send mixed messages, be sure to send clear and firm messages – both verbal and non-verbal. Hints do not work! Make your feelings known loud and clear. He can't read your mind. If he’s doing something to you that you don't like, say so!

It’s often difficult to spoil the mood of a date by denying him his lust. But no matter how passionate you’ve allowed intimacy to become, you always have the right to change your mind and say “No” or “Stop” at any point. Just make it very clear to him that you’ve absolutely decided “NO” for sure. Remember that you're not obligated to fulfill any prior expectations and should not feel guilty for opposing his desires. Be very sure of this so you’ll firmly safeguard your rights and also avoid confusing yourself – or confusing him.

Once a woman emphatically tells a man a definite "NO" and makes it very clear that she wants all sexual activity to stop, any further physical advance by the man becomes sexual assault. Tell him to stop touching or threatening you or you’ll call the police. It’s at that point that you have the right to defend yourself as necessary. You don’t need to eye-gouge him for a mild offense or otherwise overreact. Match your response to the degree of threat. Date rapists tend to be less violent than stranger rapists and rely more on physical coercion such as pinning down women. Save your most ferocious strikes for when the situation becomes desperate.

Books
• Beauty Bites Beast: Awakening the Warrior Within Women and Girls by Ellen Snortland.
• The Date Rape Prevention Book by Scott Lindquist.
• The Feminine Warrior: A Woman’s Guide to Empowerment by Al Marrewa.


Check online for women's safety
See your local registered sex offenders at FamilyWatchdog.us. But rapists average 7 victims before their first arrest – so many won’t be on the maps yet. And remember that some sex offenders may be homeless or simply prowl outside their neighborhood, or – as 24 percent do nationwide – disappear with false ID.

Deter a predator by holding Pepper Spray & a Personal Security Alarm (noisemaker or screamer) in plain sight. See those pages for how to most effectively use them.