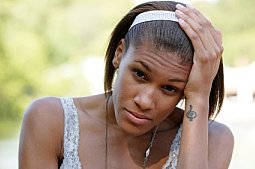 These pages focus on violent relationships - primarily intimate partner violence - between couples living together as well as teens and adults who are dating.

Australian cycling champion Stephen Pate frequently beat his wife, Joanne, for 17 years. She said he was controlling and sly and easily angered. He'd first close the doors and windows for secrecy. Sometimes she feared he would kill her. He'd apologize after the bashings, but still said they were her fault. With no true escape route from the marriage, she stayed and endured his unpredictable flare-ups. She finally pressed charges after he held a knife to her throat. In 2003, Pate pleaded guilty to multiple charges and was sent to jail for [a mere] 20 months.

2015 UPDATE: A full 12 years later, a relative of Pate began insisting that I delete the above overview of his crimes – making vague, implausible claims that the court proceedings were somehow tainted (despite Pate’s guilty pleas).

A typical wife beater uses twisted logic and half-truths to convince a few gullible supporters that he, too, is a victim. Self-pitying criminals often truly believe their own feeble, delusional excuses – and oftentimes so do their friends and family.

In response to my polite requests to verify the shabby excuses, she became increasingly angry and began hurling petty, juvenile insults at me while trying to minimize Pate’s crimes – blaming Pate's wife’s supposedly inadequate cooking and housekeeping, as well as her alleged nagging for causing him to beat her!

Instead of marriage counseling or behavioral therapy or divorce, the vile bully Pate again and again and again chose to beat his wife – for SEVENTEEN YEARS! It was his choice – nobody forced him to do it. And in addition to that brutality, their three daughters again and again and again witnessed their mother suffering at the hands of their father – scarring their psyches for the rest of their lives.

People who support and console criminals (especially those criminals who admitted their guilt in court), in effect, encourage and enable the thugs to repeat their crimes. Such supporters deserve to share in the blame and the shame – the victims do not. The above overview of Pate's crimes shall remain as is.

2019 UPDATE – I would like to say thank you for the article I just found whilst googling domestic violence: a story from 2015 in response to criticism of your reports on Stephen Pate (cyclist). He was my husband. Thank you for supporting survivors of domestic violence. It brought me to tears and also brought back some bad memories. I have also copped clack from his family and friends trying to condone his behaviour.
I feel blessed to have my 3 daughters and [deleted for privacy].
We are a happy thriving family.
Kind regards
Joanne...............

Of the three types of batterers, the first type rarely assaults his partner and is remorseful for long periods afterward, promising to change. Though the level of violence usually doesn’t escalate over time, he almost certainly will erupt again when his frustrations rise again.

The second type is dependent on his partner, thus he fears abandonment and desperately needs to control her. His levels of violence escalate over time, which is an indicator of eventual murder.

The third type, especially dangerous, is a psychopath prone to hair-trigger violence toward others – which escalates over time. Sudden, violent, irrational outbursts are the strongest indicator of eventual murder.

The second and third types are the most likely to stalk their victims when they flee. But that's NO reason to stay with him – it's a reason to get experts to help you escape.

Flor Medrano asked Los Angeles police about getting a restraining order and going to a domestic violence shelter, but she decided against it. Officers drove her home, checked the apartment, and then stood guard outside in their unmarked car. They later heard screaming, rushed to the apartment and saw a man stabbing Medrano. They fatally shot him through a front window, though too late to save Medrano. The man had climbed the rear of the apartment building and entered through an unlocked bathroom window.

This is an extreme example, but shows the unpredictable nature of domestic violence. 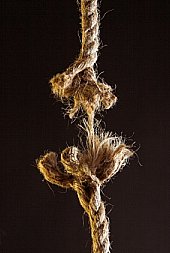 Domestic abusers tear down the victim's self esteem and cut her off from anybody who can help her. The victim feels she can't do or know any better. They often feel like they're going crazy because every decision they make they're told that they're stupid. There are serious barriers that victims have to overcome when seeking help.

Like the typical rapist or stalker, the typical batterer has delusions of entitlement – feeling he has the right to abuse his victim. A batterer often begins by eroding her self-esteem by belittling her with subtle humiliations. Then he starts using threats and displays of violence to control her – such as smashing objects, often things precious to her, even hurting her pet animals. Next are pushing, slapping, and restraining. Finally come the punching, kicking, choking, and clubbing that may result in her death. The man of her dreams has become her nightmare.
Why would a victim stay in an abusive relationship? It seems to defy logic, but there are many reasons: psychological and economic entrapment, isolation and lack of social support, religious and cultural values, intimidation over custody of children and pets, immigration status, disabilities, lack of housing, threats to hunt her down.

Oftentimes when a victim begins the process of seeking a protection order, she’ll get dozens of badgering or threatening calls from the batterer, his friends, and his family. Sometimes her own family tells her the same thing. Too often, this pressures the victim into living with the abuse and suffering in silence.

Adding insult to injury, some people condemn a woman as crazy or stupid when she doesn't leave her abuser, returns to him after escaping, or refuses to testify against him in court. The bitter irony of this injustice is blaming the baffled victim for perpetuating the crime.

She stays due to fear of his stalking her, her lack of a true escape route, and her undying hope against hope that the man she loved and may still love will someday change and never abuse her again. She's trapped on a dark path with only a faint light in the distance.

THE LIGHT AT THE END OF THE TUNNEL 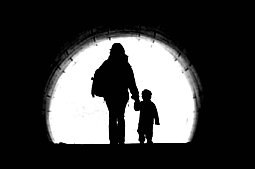 The abuse will almost certainly get worse if you stay – but leaving may infuriate your abuser who may begin stalking you or harm those you love. This bewildering predicament is why you need expert counseling to support your efforts to escape the emotional and financial ties binding you to your abuser and to find a true escape route when you finally do flee. The abuse will continue until you decide enough is enough.


The vast majority of women who've survived battering have gone on to enjoy good lives. Your new life begins with a call to those who devote themselves to helping women in desperate situations. Call your local rape crisis center (they deal with all crimes against women) and/or the resources listed below. Get help!

• Devise a code word to use with your children, family, and friends for when you need to call police but might not be able to say it.

• Develop an escape plan for you, your children, and your pets. Know where and how to go.

• Confide in a trusted friend, relative, or doctor.

• Gather all your important legal documents, extra money, spare keys, and a packed bag with essential clothing and medications. Hide them with a friend or relative.

Effective self defense requires that the attacker be disabled enough to allow the victim's escape. That creates a dilemma for a woman defending herself from a batterer with whom she’s emotionally entangled. Confusion may render her immobile, irrational, or ineffective.

It’s crucial that if you do fight back and stun or defeat your attacker then you must immediately escape and seek the police in order to avoid his retaliation when he recovers. Take control and keep it. In addition, don’t let him see the fighting techniques in Fighting Options - Overview.

Make it clear to the police that you meant only to stop him from hurting you - in self-defense. Beyond that, shut your mouth! – except to ask to be taken to a hospital. The adrenaline of the attack might have masked your injuries. Make sure the doctors document and photograph all your injuries. Say nothing more until you speak to a counselor from a woman's shelter, or rape crisis center, or a lawyer.

Women who’ve survived battering and have taken self defense classes usually report that the classes are life changing. See Choosing a Defense Class.