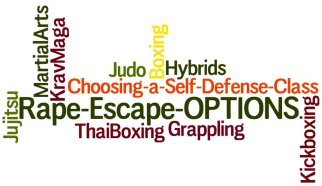 Rape Escape Options are enhanced by learning basic self defense or a martial art. This guide will help you choose wisely. (Also see Fighting Options - Overview.)

A woman in Scotland was walking home when a car pulled up and a man got out and stabbed her in the face and head with a screwdriver. She used her martial arts training to fight and wrestled the screwdriver away from him. He grabbed her purse and fled.

Martial arts are revered worldwide as glamorous, exotic, almost magical combat skills, yet there are few true devotees. In fact, only a tiny percentage of our population has ever reached the coveted black belt level. Martial arts’ training usually requires a major change of lifestyle with two to four or more strenuous sessions each week for many months or years, and it's financially expensive.

Most people simply don't have the time or inclination to study a martial art, and most beginners don't stick with it long enough to gain much benefit. Nevertheless, the students who do stay the course of arduous training gain many lifelong benefits. Martial artists, dedicated and superb athletes, are indeed special people exploring the limits of human capabilities.

However, even martial artists argue among themselves about the effectiveness of various aspects of martial arts in real life. Does a style or maneuver actually "work on the street" in real life situations?  Will it work for escaping rape?

Many experts forget that the simplest maneuvers are the most effective, as expressed in the acronym, "K.I.S.S.: Keep It Simple, Sweetheart."

Complex self-defense techniques require obsessive practice to have any chance at all in the heat of a sudden, unpredictable street-fight. Most street-fights quickly end up rolling around on the ground, mainly wrestling with some punching, kneeing, and biting thrown in. It's not unusual for a black belt Karate-type (striking) martial artist to lose a typical street brawl to an untrained but frenzied, street-smart thug. Judo and Jujitsu are much more effective in such grappling.

Unlike the typical martial arts school of thought, the U.S. military doesn't have years and years to train elite Special Forces in hand-to-hand combat. They're quickly taught to blind, deafen, maim, and kill – using the no-nonsense K.I.S.S. rationale and embracing the motto: "Success in hand-to-hand combat is 10 percent skill and 90 percent will." See Willpower.

Which Style Should You Choose?

Many dozens of styles claim to be the best, although tournament or sport styles are less effective in real life combat. Many students wisely shop around for years, trying a variety of the bewildering array of traditional styles with ancient histories and legends. They tend to feature Asian terminology and rituals. Many styles – such as Karate, Judo, and Kung-Fu – involve various elements of the following categories:

• Boxing focuses only on punching, blocking, and evading punches, thus is unquestionably the king of those skills, and only those skills. Other martial artists often seek out genuine boxing training to improve those skills. Aerobics classes with a boxing theme will increase your stamina, and teach you basic punching skills but little about actual fighting.


• Kickboxing, as the name implies, combines boxing and kicking. Authentic Thai Boxing (Muai Thai), combining boxing with a few simple but brutal kicks, is often considered to be the most effective overall striking style. Aerobics classes with a Kickboxing theme will increase your stamina, and teach you basic punching and kicking, but again, little about actual fighting.


• Hybrids. Many martial artists, departing from ancient traditions, have created eclectic – and excellent – blends of the above fighting methods. (Many traditional martial arts - "hybrids" of the past - are more rigid in philosophy.) Modern hybrids are usually more realistic for basic rape escape and don't have as much ceremonial baggage. The United Fighting Championship spawned Mixed Martial Arts contests that are completely hybrid and have minimal ceremony.

In all, the ideal choice for rape escape is a versatile, flexible hybrid style that combines grappling, punching, and kicking. Finding such a school may take awhile, but training in almost any style is at least somewhat beneficial. Some schools offer "street self-defense" courses for women separately from their regular classes. Completing a short-term program is better than dropping out of a long-term program.

Enhance your rape escape options and likely scare off a predator by carrying a Personal Security Alarm (screamer or noisemaker) & Pepper Spray in plain sight. Those pages show how to use them most effectively.

Pages related to Self Defense