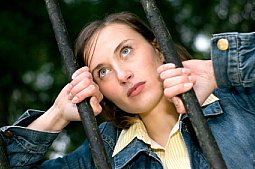 The Battered Woman Syndrome develops when a woman is bewildered and entrapped by a domineering man whose moods swing between sweetness and rage. He's also jealous, suspicious, and snoops around to check on you. He accuses, blames, and ridicules you - oftentimes claiming that he's "just kidding," other times he's dead serious.


Rapists, stalkers, and batterers all have delusions of entitlement to women – feeling they have the right to "own" a victim. The syndrome usually begins by eroding her self-esteem with belittling comments. Then he starts using threats and displays of violence to intimidate her, such as smashing things precious to her, even hurting her pets. Next comes pushing, slapping, and restraining. Finally comes punching, kicking, choking, and clubbing that may kill her. The man of her dreams has become her nightmare.


She now knows she shouldn't have stayed with a violent man. She kept excusing his violence – until he shot her above the right eye with a .22-caliber, hollow-point bullet. Most of the bullet fragments are still inside her head. Her husband is in a Wilmington SC jail awaiting trial.

Typically, it gets worse over time. Up to one-half of all homeless women and children in the U.S. are fleeing domestic violence. Attempts to leave may be seen as a threat to the abuser's control, and killing her may be his only way to maintain control. 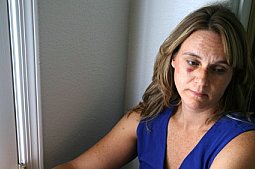 Rita stayed with her abusive boyfriend because he had a "hypnotic charm." He started mentally abusing her, then physically – pushing, slapping, biting, burning her with cigarettes, throwing a knife at her, holding her down and cutting her dozens of times. Her family tried to help and she even left Alabama for awhile, but she couldn’t stay away. She called it an addiction. Neighbors often called the police, but Rita wouldn’t press charges. She finally decided to leave when he beat her nearly to death. 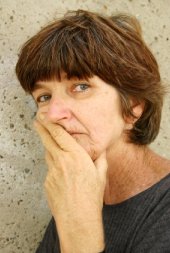 Battered Woman Syndrome crosses all demographic lines: any age, class, religion, ethnicity, gender, sexual orientation, and geographic location – including the partners of doctors, lawyers, cops, judges, and pastors. Since it’s often hushed up because of fear, shame, and a perverse desire to protect the batterer, overall statistics are sketchy. But a 2000 Department of Justice survey found that “25 percent of women (and 8 percent of men) reported they’d been assaulted by an intimate partner during their lifetime.”

ARE YOU at RISK?

Stacy Peterson, 23, told her 53-year-old policeman husband, Drew Peterson, that she wanted a divorce. Two days later she disappeared without a trace. Stacy Peterson had told relatives she was afraid of her husband – he'd “watched her every move” and threatened to kill her if she tried to leave. He's now in prison. (Also, two former wives of Sgt. Peterson had died mysteriously but his Bolingbrook, IL police department believed his stories.)

Battered women may think the abuse will continue – but not kill. Ask yourself:

• Has he threatened to kill anyone, or threatened suicide?
• Does he abuse pets?
• Does he think he owns you – or can’t live without you?
• Is he depressed or abuse drugs or alcohol?
• Has his behavior changed recently?
• Does he have a history of domestic violence.
• Can he find you?
• Has he received a restraining order or divorce papers? Have you told him you are leaving?

Even if your answers are ‘no,’ he can still be dangerous, especially when you're leaving an abusive relationship.

Britain's Scotland Yard uses six factors to forewarn of domestic murder:
1. Pregnancy: Violence increases if the victim is pregnant or has recently given birth.
2. Stalking: if he behaves obsessively, such as watching, following, and frequent phoning of his partner.
3. Sexual assault: If he has attacked the woman sexually, then he's likely to commit a more serious offence.
4. Increase in violence: A rise in the severity or frequency of assault indicates greater risk.
5. Custody: If the woman is involved in a dispute over contact with a child.
6. Cultural restraint: If the woman is from a culture where contact with society and police is restricted, then any call for help must be given added weight.

• See Domestic Violence for batterer's profiles and how to escape the battered woman syndrome.

• See how to Start Over After Financial Abuse

• See ﻿﻿﻿Domestic Violence Resources and Tips for Victims and Survivors﻿