When threatened, enhance your stress control by acting - in both senses of the word. Acting (pretending to be) fierce makes it easier to take fierce action - to actually become what you project.

[NOTE: This is your defense against an UNarmed attacker. For an armed attacker, see the ‘How He Reaches For A Weapon’ section on Spotting Danger]

THE FACE AS MASK 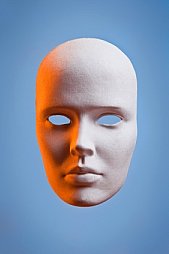 Angry body language shows a scowling, piercing glare, lips either tightened or curled back to bare one's snarling teeth, and hands raised to the front. This defensive posture empowers you while discouraging a predator. (The downside is that it spoils the crucial surprise element of a Sucker Punch).

In contrast, fearful body language shows stress with wide, blinking eyes, raised eyebrows, and an open, gasping mouth. This is what a predator hopes for in his prey. (And this is what makes him ripe for a surprise attack Sucker Punch).

You are your actions. Faking ferocity is ferocity. Practice it occasionally to become familiar with acting ferociously in a crisis. Imagine defending yourself in various scenarios. Act fierce. Fake it until, over time, you can quickly adopt that mindset and actually become what you pretend to be – as in the maxim, “Begin to act like the person you want to be and you will become that person.”

“Psyching” is to prepare psychologically for a high-stress challenge. The best way is through “mental rehearsal.” That is, in your mind’s eye, seeing yourself performing successfully despite stress. Visualize success - conceive it, believe it, achieve it.

Psychological stress control research shows that people live up to their own expectations or self-images and actually become what they project to themselves. That’s why elite athletes, high-level performance artists, and the U.S. military commonly use visualization techniques in full-stress training applications.

Most impressive is the U.S. military’s use of mental rehearsal for high-stress, crucial training. For instance, one of the most stressful of all human endeavors is to land a skittish warplane at speeds nearly 250 mph in the dark of night, trying to catch its tail-hook on a braking cable while also trying to land softly on the pitching, rolling deck of an aircraft carrier in rough seas. Navy pilots regularly use mental rehearsal as a vital part of their stress preparation.

When you're frightened, you stop thinking with your forebrain and begin thinking with your midbrain (which is nearly identical to the mind of an animal) and it is the animal who growls or snarls with the most ferocity who has the most chance of scaring away the threat.

Extensive training is rare for guerilla military combatants or for the ordinary victim fighting a criminal, yet they nevertheless often succeed. To enhance your performance, practice the following – the more the better:

Flipping the Switch from Fear to Fury


• Sit quietly with your eyes closed. Recall a time when someone threatened you with physical harm and you felt helplessly frozen with fear. Feel your heartbeat. Recreate the feelings as accurately as possible.
• Vividly recall a time when you were fighting mad and wanted to furiously smash something.
• After you’ve gotten a good grip on both the fear and the fury, alternate back and forth between the two until it becomes like flipping a light switch on and off.
• Imagine someone attacking you or a loved one. Imagine yourself hitting and kicking the attacker. Imagine yourself victorious. See yourself winning – always winning – even if you’re injured. In the stress of a crisis, your mind will act according to the blueprint you’ve programmed into it while vividly imagining yourself victorious. Your mind must have a goal. How you prepare is how you will act in a crisis.
• Stand up and strike the air (shadowbox). Practice both with and without a large mirror. Imagine the attacker as your target. See, hear, and feel all the events as realistically as possible. Angrily shout "NO!” with each strike. Feel your adrenaline’s power and channel it into each punch and kick. See Self-Defense Techniques
• Channel your anger into powerful strikes by using Cushion Practice (with a partner holding the cushion). Feel the impact grow stronger.
• Vividly imagine yourself successfully fighting then escaping high-stress dangers. Begin to act like the person you want to be and you will become that person. In all: see it, feel it, be it.

Don't scream – it shows helpless fear (though it may attract help - if a Good Samaritan can hear you). Instead, just as martial artists “yell” when striking targets, yell “NO!” with each strike, because yelling:


• startles an opponent – even a big thug,
• breaks the spell of your surprise,
• forces you to breathe deeply and avoid shallow panting, thereby forestalling fatigue,
• focuses your energy and physiologically empowers your strike,
• allows you to act and feel ferocious, thus become ferocious.

“No” is the most basic word on this planet and is assertive and empowering for fighting back. It evolved from the prehistoric growl into the same meaning in many languages, with only minimal variations such as "Nyet" in Russian, "Nien" in German, and "Non" in French. It’s primal, visceral, and empowers you to help control fear. It’s quick and leaves no doubt about your feelings. To empower yourself, grunt “NO” in an angry, commanding, animal-like bellow with each strike - like the battle cry of warriors.

You may prefer a deep, growling “grunt” instead, as boxers do. Either way, deepen your voice and imitate an angry animal. Pay close attention the next time you see an animal get ferocious – snapping and snarling with mad-dog intensity – that is your role model. The ferocity alone instinctively causes an attacker to pause - a crucial moment allowing you to attack him.

Foul language helps you become more ferocious. Usually, tough talk is the only language a criminal understands (see Tough Talking in Outsmarting). Become enraged! Fake it if you must, the reality will follow.

Quickly shake your head “NO” from side to side to help clear your mind of panic. It’s an age-old boxing and martial arts technique that somehow, for reasons still unknown to medical science, breaks the physiological "fear cycle" in the brain. As an added bonus, it also makes you look crazy – thus intimidating – to your adversary.

What if the Attacker is Twice Your Size?

When a little cat can’t escape a big dog’s attack, it’ll attack the eyes – then escape. Yes, size and strength are important, but far more important is a lightning quick ferocity aimed at your attacker’s very fragile targets: eyes, throat, and testicles. If he’s twice your size, his testicles will be easy to reach.

Anyway, what other choice do you have? When someone’s trying to kill you, your best bet is not whimpering – but roaring! Besides, fighting for your life spurs a crucial ferocity that may well make you triumphant. You can imitate the little cat described above or the little monkey that flings itself onto a man's face and clings to it while frenziedly shredding it (see Clinch Attack on Self Defense Techniques). Use the extra strength and ferocity from your fear-induced adrenaline to make your fear become a weapon.

To deter a predator, carry a Personal Security Alarm (screamer or noisemaker) & Pepper Spray in plain sight. Those pages tell you how to use them most effectively.