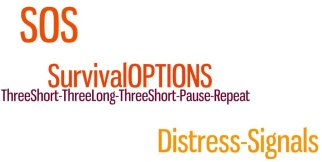 Sometimes survival options come down to "SOS" – an international distress signal. In the mid-1800s, Morse Code was used for the first electronic communication device: the telegraph. The letters "SOS" don't stand for anything in particular, such as "Save Our Ship" or "Save Our Souls." In Morse Code, the letters "SOS" simply create an unmistakable sound pattern: three short - three long - three short - pause - repeat: dot-dot-dot, dash-dash-dash, dot-dot-dot (· · · – – – · · ·), and they're easy to remember in an emergency.

The term "SOS" now refers to all distress signals - with or without Morse Code - and vary depending upon where you are.

Search/rescue aircraft look for large SOS letters spelled out on the ground (the bigger, the better - of course).  You can use rocks (or whatever) to show a sharp color contrast on plain surfaces - such as using dark rocks on a pale surface. And vice-versa: using pale rocks on a dark surface. OR... it's easier to make three large X marks in the shape of a triangle, such as:

• Campers can send three puffs of smoke or lay out 3 markers in a large triangle to signal a search plane. After dark, you can send Morse Code SOS with a flashlight. Or you can use 3 campfires in a triangle (as in the X marks in the shape of a triangle above).

• A hiker (in a highly visible location) should slowly and repeatedly raise and lower outstretched arms (on each side) – with hands describing a large circle. And yell "Mayday!" or "Help!" repeatedly.

• “Pan-pan” is adopted from the French word “panne” (a ‘breakdown’) and is used vocally for a non-life-threatening predicament – though it’s not widely known in most countries.

• Drivers with a CB radio call for help on either channel 9 or 19. Since you can use your voice over the radio rather than blasts or taps, you can say  "Mayday! Mayday! Mayday!" - pause - repeat.

• If you're attacked in a populated area (where somebody helpful can hear you) yell, "Help! Police!" (see Kitty Genovese - Article Bank).

How can a kidnap victim SILENTLY summon help without alerting her kidnapper – or summon help when window-glass muffles her shouts? Not by waving – that looks like she’s merely saying “Hello.” Better to draw an outstretched hand toward her chest, as in the “Come here” gesture, or intertwine her fingers and clasp her hands together in a pleading/praying gesture. A frantic facial expression helps drive the message.

• Carry a Personal Security Alarm (screamer or noisemaker) at all times.