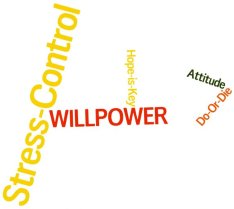 Stress control is a matter of a do or die attitude of hope and willpower.

Hope doesn’t expect that things will succeed. Instead, it sees all the obstacles, all the threats, all the chances of failure. And through all that doubt, it sees a road to survival. Without hope you’re nowhere. You can’t go on. With hope, you have a chance.

Fear Can Scare You To Death

Even a healthy heart can be overwhelmed by adrenaline and simply stop beating, but only if you believe there’s no hope for survival, say Dr. Robert Eliot of Toronto’s Canadian Stress Institute and Dr. Ichiro Kawachi of Harvard.

The spirit of hope can make or break you. Extreme danger releases maximal adrenaline which needs to burn off its tremendous energy through fight or flight. Hope – the belief that you have a fighting chance – focuses your adrenaline’s superhuman strength on saving your life.

A crisis is hopeless only if you give up hope. Hope gives you a fighting chance.

An ordinary human can conquer a crisis and be superhuman through sheer willpower, as was Tracy Deel, a 32-year-old X-ray technician abducted late one night outside her Texas apartment by two armed robbers and taken to a field. They ordered her to her knees. She refused to bow to them.

Then he fired the gun. The first bullet hit her in the eye and the lights went out. The second hit her in the mouth and she swallowed gushing blood. 15 bullets pierced her body. She passed out, but soon came to, alone, saw a house's light and began stumbling toward it.

Rather than giving up and bleeding to death, she forced herself to stagger 300 yards to the light, refusing to die without giving her all. Each time she fell, she cursed herself to get up and live.

Not all severe injuries are overwhelmingly debilitating or inevitably fatal. Oftentimes, your hope, belief, and willpower - your stress control - make the difference between life and death. Expect to be afraid, expect to be hurt, but expect to survive nevertheless.

If you're a victim of a violent crime, you'll probably get hurt. But don't let that freeze you – adrenaline lessens your pain, and you're greatly distracted anyway when you're fighting back. Ignoring your injuries is crucial to survive.

HER WILLPOWER WAS STRONGER THAN HIS

Gerald A. Lee came to her Atlanta-area house with a gun. He beat and raped her. But when he threatened to rape her 6-year-old daughter, she grabbed a butcher knife and stabbed him. He grabbed it and stabbed her. They struggled in a long, do-or-die battle. In the end, the rapist lay dead. The heroic woman was stabbed 25 times but lived – and her daughter was safe. Her willpower was stronger than his.

Carry a Personal Security Alarm (screamer or noisemaker) & Pepper Spray in plain sight. Those pages tell you how to use them most effectively.