Fighting Options:
When to Fight 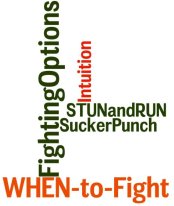 Learning your fighting options now of when to initiate violence is far better than waiting until you're facing a dire threat from a criminal attacker.

[NOTE: This is self defense strategic advice - not legal advice. Ask your attorney how this page applies to you.]

Sometimes, from out of the blue, a force predator suddenly pounces upon his prey. Other times, he’ll appear and pause as he positions himself for maximum advantage, or lingers while relishing your fear.

When your intuition tells you that you’re the target of an imminent attack, how do you best defend yourself – by attacking first or waiting to react to an attack? Strategically, (as sucker punch explains) “beating him to the punch” is better than “waiting and seeing” and hoping he doesn’t strike you first.


Action is always faster than reaction. Anyone who acts first has a huge advantage: that eternal split-second between their action and the other person's reaction. Acting first is far better than clumsily trying to react effectively.

If you impose your will with a surprise attack, you’ll be acting instead of reacting. You’ll suddenly "turn the tables" on him and keep him busy scrambling to defend against your continued offense. “The best defense is a good offense.” The sooner you act the better – and keep pouring it on until he is no longer a threat and you can escape to safety. STUN & RUN!

When to Act First

Criminal predators attack suddenly. So, when should you attack first?

1. If he’s threatening you with imminent physical harm,
2. if there’s no other avenue of escape,
3. if the first four of your five victim’s options haven't been effective,
4. and if your intuition tells you that his attack is inevitable...

then attack him first. With no warning at all, make him fear you with a surprise, full-blast attack using the optimal mindset. Strike quickly, often and ferociously. Fight like a mad dog. Once you begin, there’s no turning back. Never give up. You must finish what you start, though only forcefully enough to allow your safe escape (you’re not legally allowed to harm him beyond that). STUN & RUN! Then immediately seek the police.

If you do decide to catch him by surprise with a fully committed attack, how should you do it? By using a sucker punch to start your barrage. You may also need to use self defense techniques before you flee.

See "After Escaping – Immediately Call the Police" on fighting.