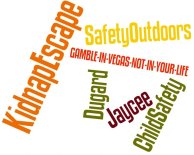 Jaycee Lee Dugard, who was snatched from a South Lake Tahoe NV bus stop as an 11-year-old child in 1991, turned up at a California police station after 18 mysterious years. A convicted sex offender, Phillip Garrido and his wife were arrested in the kidnapping.

Witnesses reported that on 10 June 1991, a car pulled sharply in front of Jaycee. Arms reached out and dragged her inside. Her stepfather watched in horror from the family garage a third of a mile away and grabbed a bicycle to give chase. Too late.

Garrido was on parole after serving a mere 11 years in prison for a 1976 kidnapping and extremely brutal rape of a woman who had agreed to give him a ride when he approached her in a parking lot. Garrido told the woman his car had broken down and asked her for a ride.

How could Jaycee Dugard have escaped from her kidnappers? What can your child do to escape a similar crime?

She likely never would have been kidnapped had she known the simple lessons in child safety outdoors and child kidnap escape.

How could Garrido’s 1976 victim have escaped from her kidnapper? And what can you do to escape a similar crime?

Always remember the basis of all the lessons on this website: Gamble in Vegas – NOT in your life.

Enhancing Your Self Defense

Deter a predator by holding Pepper Spray & a Personal Security Alarm (noisemaker or screamer) in plain sight. And those pages show how to use them most effectively.