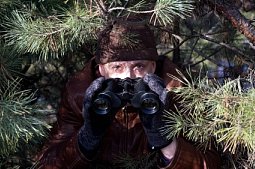 Stalking is the creepy threat to women's safety. Learn the stalker warning signs, when to get a protection order, and how to stop a stalker.

Thousands of stalking cases are far more bizarre and scary than most normal people can imagine. Stalkers go to outrageous extremes to connect with the object of their obsession yet may appear perfectly normal. Sometimes women are slow to realize they're being stalked because the elaborate methods are so subtle – in the beginning. For instance:

A young woman didn’t know that a classmate had a demented crush on her. He’d traced her boyfriend’s address and bludgeoned him to death. Not a suspect in the murder, he even drove her to her boyfriend’s funeral. Despite his further romantic efforts, she eventually found another boyfriend. Her stalker then traced him, too, and set fire to his house as well as his relative's. This time he was arrested and the whole story came out.

Ara Gabrielyan tracked his ex-girlfriend's whereabouts by attaching a cellphone and GPS unit to her car. He'd meet her unexpectedly at a bookstore, an airport, a cemetery and many other Sacramento CA places after she'd broken up with him. She finally caught him under her car trying to change the cellphone's battery.

Government spies worldwide use these tools, and so can a moderately tech-savvy stalker who just might happen to target you. If ever you notice strangely “coincidental” meetings with an ex-partner or someone who might be overly attracted to you, or if your intuition senses that you’re being watched or followed, contact police detectives. A stalker may be anyone imaginable (an ex, an acquaintance, or a complete stranger).

State laws generally define stalking as a malicious pattern of harassment that would instill fear in a reasonable person. Roughly half of all women victims are verbally threatened, two percent are murdered (usually ex-partners), and many women suffer from anxiety, insomnia, social dysfunction, and depression for an average of nearly two years.

At an estimated rate of 1.4 million cases each year, stalking behavior may include phone calls, letters, gifts, snooping around the woman’s private life, tailing, threatening or endangering, and vandalizing or stealing. Stalkers may vacillate between sending a dead rat one day and flowers the next. The victims, police, and courts are usually baffled in stopping stalkers because oftentimes no laws are broken or are difficult to enforce.

Stalking begins when a romance fizzles out for one lover and the other won’t let go, or a deluded wanna-be lover won’t let go of an imagined romance. The sore loser begins futile tactics that only further alienate the target, or seeks revenge for being rejected. Typically, if the harassment continues for more than two weeks, it will get worse over time.


A woman finally moved to another city to escape a stalker and covered her tracks to avoid being traced. But soon her stalker found her town and was still trying to find her exact address when he took a job delivering pizza. They were both shocked speechless when the woman opened her door for the pizza she’d ordered.

Men comprise 87 percent of stalkers and 78 percent of stalking victims are women. While all stalkers are mentally unstable and unpredictable, each is unique and may come from any socioeconomic or cultural background. There is no one sure way (legally) women can prevent a stalker from escalating to violence or stopping him outright. Even a prison term may stop him only briefly while increasing his anger. But at least the women have time to relocate without a trace.

Marjorie Wolfe remembers how Jeffrey Calvert was kind and gentle when they began dating in 1992, but quickly became controlling and emotionally abusive. Three years later, while Calvert was jailed in Bellingham WA for stalking her, Wolfe changed her name and moved out of state. In March 2008, she learned that Calvert shot and killed another ex-girlfriend, Christin Stock, and then himself – and realized it could have been her.

A stalker may pursue anyone imaginable, such as his employer, minor or major celebrities, or even his psychotherapist. Even a physician may be a stalker: a physician in Wichita KS was convicted of stalking 17 of his female patients. While every situation is different, (and to replace clunky clinical terms) I've created new terms: “Romantic Fantasy” and “Ex-Partner” (and added “Grudge” and “Sporting” stalkers.)

“Romantic Fantasy” stalkers comprise roughly 25 percent of all stalkers. They target a friend, an acquaintance or a complete stranger - usually women. These stalkers have “psychological disorders” and truly believe their fantasies. Early on, the stalking may resemble normal romantic attention until it persists after the woman clearly rejects him, whereupon the stalker may threaten or become violent – usually damaging property, but may harm or even kill the woman.

“Ex-Partner” stalkers comprise roughly 75 percent of all stalkers. They target a former or current romantic partner (usually a woman who’s just begun trying to end the relationship). While extremely jealous and insecure, they may or may not have “psychological disorders” but do have serious “personality disorders” and are potentially dangerous.

[Incidentally, “Grudge” stalkers, seeking revenge for reasons real or imagined (not romantic), usually vandalize or harass their victims but may escalate to violence. “Sporting” stalkers seek pleasure in controlling their victims through fear, usually without harming them. Neither of these are tracked statistically as such and are not the focus of this page.]

Scare off a predator by holding Pepper Spray & a Personal Security Alarm (noisemaker or screamer) in plain sight.Those pages tell you how to use them most effectively.

• Stalker Warning Signs: how to nip it in the bud.
• Protection Order: should you get one?
• Stop a Stalker: the Top 10 Ways to enhance women's safety.
• Cyber Stalking: how to stop it FAQ.

See the registered sex offenders living near you at FamilyWatchdog.us. But remember that rapists average 7 victims before their first arrest – so many won’t be shown yet. Also, sex offenders may prowl outside their neighborhood, or are homeless, or – as 24% do nationwide – assume false identities and simply “disappear.”