Stress control includes knowing beforehand how to deal with:

Getting Punched or Struck with a Blunt Object 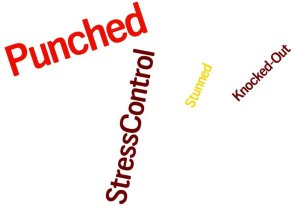 Spending the final three-and-a-half years of my nine-year “boxing career” as a spar-mate (or human punching-bag) for world-class professional fighters, I somehow avoided any overtly obvious brain damage.

Throughout that time, my nose remained broken and both eyes blackened as I absorbed thousands of punches while desperately striving to survive yet another round with a ravenously hungry contender for boxing's big time. Thus I thoroughly learned the following stress control insights:


• Try to catch a body blow with tightened muscles, preferably in the side – or better yet, block it with your arm (though your arms will be rendered useless if they absorb too many punches within a short time).

• Getting nailed in the gut bends your body into the blow with an OOF! Your body wants to curl up in a ball on the ground. Pain will disable you unless you choose to channel it into a raging counterattack.

• A punch in the face is less painful, and the head even less so. Try to reduce a blow’s impact by moving with it in the same direction to minimize the jolt. Better yet, block or dodge it.

• An ear strike hurts but isn’t debilitating, [unless you're in a street fight and an open-palm flatly slaps your ear (an ear-clap) and air pressure knocks your balance “gyroscopes” out of whack, or pops your eardrum – making you stagger like a drunkard].

• A blow to the nose hurts but isn’t debilitating, unless it impairs your vision by watering your eyes. The worst result of a blow to the head (other than brain injury or death) is being rendered unconscious.

KNOCKED SILLY vs KNOCKED OUT

Being fully knocked out – unconscious – is, of course, oblivion. But being conscious or unconscious is not all black or white; there are many shades of gray in between. Most blows to the head only knock you out briefly, anywhere from a nanosecond to maybe a full second but leave you standing upright. You really do “see stars” – or a swarm of flashing multicolored lights. You feel a jarring sensation, pain, and stress, but that’s irrelevant. You must ignore it.

A heavy blow to the head leaves you teetering on the brink of oblivion and feeling like you’ve plunged underwater into a pitch-black netherworld while craving a deep sleep. Certain that you’ll plummet into an abyss and never return, you struggle to wake up now! Wrenching sheer willpower from somewhere within, you claw upward to the barely lighted surface. Your consciousness flickers like a candle in the wind barely keeping the black void from consuming you as your mind’s eye slowly regains focus.

You groggily scramble to keep moving evasively while lashing out with retaliatory blows that are as much defensive blocks as offensive strikes. You’ll continue to quickly regain clarity and coordination if you can evade further blows in the meantime. That’s why a dazed boxer tries to clinch – hugging his opponent to stifle his punches – trying to buy some time as his opponent hungrily charges in for the kill.

Less than one second has elapsed during all this. You’re still on your feet, and any witness would’ve seen you getting rocked but not know of your light catnap while still standing and moving. This whole episode may occur anywhere from zero to many times in a fight. In all, remaining conscious is often a matter of pure willpower!