Criminal Minds use Quick Tricks - sleight of hand, simple disguises, and physical bluffs - to fool you.

Criminals devise disguises that range anywhere from uniforms (utility worker, deliveryman, police, etc.), to bandages, slings, or crutches. Or the predator may be female with a baby in her arms and a gun in her pocket.


A surprisingly effective quick trick is to change clothing. But not like the laughable Clark Kent/Superman charade that somehow fooled Jimmy Olsen and Lois Lane. How could they not recognize their good friend feebly disguised in tights and cape and minus eyeglasses?

But a stranger wearing a black jacket, hat, and sunglasses can duck away then reappear in a white shirt and without a hat and sunglasses, suddenly seeming to be a completely different person.

Some criminals wear several shirts to be shed one-by-one while eluding pursuers. Eyewitnesses, notoriously unreliable as witnesses of strangers, will likely be deceived – especially in the chaos of a crime scene.

The following may seem as silly as the Three Stooges’ pranks, but are stunningly effective for the criminal minds of brawlers, predators, and other shysters. Elite athletes and stage performers have raised them to an art form, but they’re all merely variations of what kids do naturally when playing games.

A stage magician uses distractions (called "misdirection") to divert your attention from his sleight-of-hand. A variation of this happens frequently in normal conversation when you glance behind your friend and cause him to look over his shoulder to follow your glance. If you did this with a gunman pointing a gun at you from very close range, you might then have a split-second chance to grab his gun. If you’re smooth and don’t overact, this little trick can make a big difference when you need all the help you can get.

Play wrestling with a dog can show another form of distraction. Face Sparky, hold one arm out to your side and waggle your hand to get his attention. Now he won’t see your other hand reaching for him. Boxing champion Sugar Ray Leonard often used this simple distraction to punch, mock, and discourage highly skilled opponents.

A common boxing feint is the “hand-fake” – suddenly jerking one hand a mere inch or two, just enough to cause a nervous reaction in your opponent. A split-second later you’ll throw the real punch – perhaps with the other hand. It works like a charm.

Football players, too, constantly use feints: a quarterback fake-pumps his throwing arm to mislead opponents, and ball-carriers usually feint to run past an opponent – that is, pretend to change direction one or more times. Basketball and soccer players also constantly use feints to mask their true intention.

An experienced brawler may make a big show of reaching for something (presumably a weapon) with one hand while the other hand sneaks toward the real (hidden) weapon. Another common bluff is the phony surrender. If defeated, a thug may surrender and cry for mercy in order to surprise-attack you after all.

If a potential mugger is coming toward you, try the old bluff of putting a hand in a pocket or inside a jacket as if you’re holding a weapon – and leave it there. Casually, confidently keep your eyes glued vaguely just past him using your peripheral vision to watch his every move. A criminal mind may well decide to leave you alone.

If he nonetheless decides to rob you, and demands to know what you’re reaching for, tell him it’s your cash and slowly hand it to him. Then immediately run away while yelling for the police. To the criminal mind (his psychological profile), as long as he’s got your money and you’re running away while yelling for help, it’s in his best interest to simply run off in another direction.

Or, as he approaches, maybe feign craziness. He’s certainly reading your body language and may leave you alone. See Optimal Mindset and Outsmarting.

Lastly, in any encounter with someone you distrust, always beware of a handshake as a gesture of goodwill or peacemaking. In the blink of an eye he can yank your hand to pull you forward off balance while slipping behind you to quickly apply a Rear-Arm-Choke around your throat. It’s a slick trick that criminals commonly practice in prison yards to pass the time for criminal minds. So, instead of shaking the hand of someone you intuitively distrust, simply step back quickly and say, “Sorry, I've got a cold and I don't want to infect you,” as an excuse to always keep at least an arm’s length away from him. 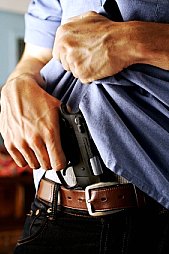 As Spotting Danger points out, when a criminal reaches for a gun, it usually looks like he's reaching for his wallet with one hand – either from his back pants pocket, rear waistband, or the inside front of his jacket. If the gun is tucked into his front waistband, he'll probably use two hands – one to lift his loose shirt that's been hiding the gun, the other to grab the gun. In any event, by the time he gets the gun into position to fire, you can be already running away in full stride.

Beyond extremely close range (0-3 feet is "point-blank range" and 3-9 feet is "close range"), handguns are very difficult to shoot accurately. According to Sanford Strong, retired San Diego police SWAT team instructor and author of “Strong on Defense,” police officers miss with 75 percent of close-range shots while criminals miss with 96 percent of close-range shots. And a moving target is even more difficult to hit.


Besides, J.J. Bittenbinder, Chicago police detective and author of “Tough Target,” as well as the U.S. Department of Justice statistics say there’s only a 12 percent chance that the criminal mind of a robber will call attention to himself by firing a gun in a populated area (at any range) and only a 3 percent chance of hitting you fatally.

However, knives are more easily hidden, more quickly drawn, and have no “loudness deterrent” because they're silent. Still, throw down your wallet as you run to safety. For complete details, see Victim’s Options and Kidnapping.

Also see Pepper Spray and Personal Security Alarm (both those pages show you how to use them most effectively).