Child kidnapping: what every parent should know about the dangers kids, tweens, and teens face when alone outdoors. 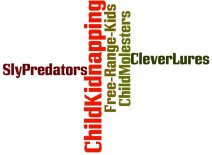 The two 13-year-old girls were followed around inside the Appleton WI mall by a man in a business suit. The man, Jamie Lee Sames, followed the girls, identified himself as a police officer, and accused one girl of shoplifting. He ordered her friend to sit on a bench and took the victim behind a dumpster where he fondled her – claiming he needed to search her for stolen property.

The victim’s mother had thought that two 13-year-olds would be safe together at the mall in a wealthy suburb. But now she realizes that crime can happen anywhere at any time.

If you’re unsure whether someone is a plainclothes police officer, ask for photo ID. You can also call 911 to verify his identity. And, if you’re still doubtful, ask the dispatcher to send a uniformed officer.

Fortunately, though the predator kidnapped her to a second location (and he could have taken her to a distant, secluded crime scene), he allowed her to survive. The infamous serial killer, Ted Bundy, used the same scam to lure a victim (see Wolf in Sheep's Clothing) – and he also had a phony police badge.

To safeguard their children, parents shouldn’t gamble that kids on their own can avoid the clever lures of the countless thousands of sly predators. Parents need to see A Child Molester’s Fiendish Lure and Free-Range Kids.